A-Block (Aブロック, A Burokku), also known as A-Block Base (Aブロック基地, A Burokku Kichi), is a location and a group from the manga and anime series, Bobobo-bo Bo-bobo. It is an amusement park run by A-Block leader, Tokoro Tennosuke. Due to this status, it is also known as the Fairy Tale Amusement Park (メルヘンチック遊園地, Meruhenchikku Yuenchi)/Dreamy World Fairy Tale Park in the English dub.

A Hair Hunter base that is centered in an amusement park that grew from a field of chopsticks planted by Bo-bobo.

After he is defeated, Tennosuke eventually joins Bo-bobo's resistance. Although one would figure A-Block is the most powerful of the Maruhage Empire's bases just based on the alphabetical order alone, it is actually considered one of the weakest. Z-Block is really the most powerful of the lettered blocks since the power scale actually goes backwards. In fact, even other incarnations of A-Block are thought to be more powerful, such as the A-Block of the Former Maruhage Empire and the A-Block of the Neo Maruhage Empire.

The base did not last long after its defeat at the hands of Bo-bobo. After the battle, Tennosuke left to return to his old job at the local grocery store, leaving the base without a leader. The base was then toppled again by Hatenko. Sometime later, the base was finally closed down. In the end, A-Block was torn down to make way for the Former Maruhage Empire's new, bigger base, Neo Hair-Hunt Land MAX. 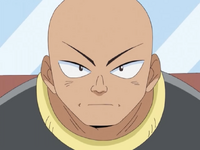 (完・乱謝, Kanransha)/ Mary-Go Round: Guardian of the Ferris wheel at A-Block's Amusement Park base. Bo-bobo gets into nice conversation with him while fighting him. He is able to turn his Ferris wheel into huge electrical charges. Bo-bobo and Don Patch defeat him with a prank call. He was once rejected by a girl named Ayumi. 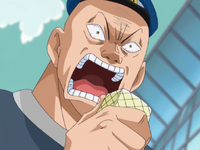 (ウキッキ)/ Wonk: Guardian of A-Block's monkey train. His name is based on the sound monkeys make in Japanese. 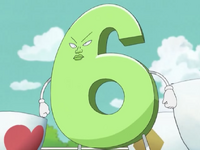 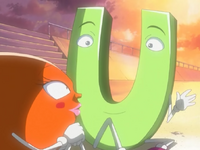 (ロク, Roku)/(Ｕくん, U-kun)/ U-ie: Guardian of A-Block's coffee cup ride, he was formerly a "U" that was in love with Don Patch (Patchimi). He tries a brain-washing ability to make his former "girl-friend" his again using hand signs of consecutive numbers, yet all it does is turn him into a goat. He is defeated when Bo-bobo proves that "3+3=8", not 6 (this was explained through some sped-up advanced math). He later briefly appears as a participant in the new emperor playoffs.

(サカナ兵. Sakana-hei): A large group of pirahnas that lurk in the Pirahna Training Area. They wield cheap, not to mention poorly drawn, guns. They are easily dispatched by Heppokomaru.

(ハゲチャツ テルノ): The defeated leader (by the time we see him) of A-Block's Jet Coaster. 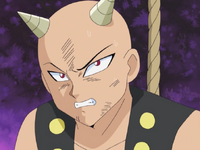 (トモヒロ)/Spikey: An hair hunter taken hostage by Tennosuke that is meant to lure Bo-bobo into the base. As punishment for likely betraying the general, Tomohiro is given the choice to either be forced to eat spaghetti & meatballs or eat rice and curry. Bo-bobo tries to make him choose rice and curry, he goes with the spaghetti instead. It is assumed that Tomohiro is well known by Bo-bobo even though this is the first time he is seen in the series. He seems to have completely given up his hair hunter ways as he was seen outside with Beauty while she was playing with one of the cats that had fell on him from an early event, and he just sits there with no harm done, declaring that he wants to open a pet shop.

(ケガール, Kegāru), also known as Dribbles the Clown in the English dub: The "Tourguide of Dreams" (夢の案内人) of A-Block Amusement Park, who wears a pink koala costume.

When the rebels arrive at the park's front gate, Kegirl shows up to greet them. However, before they're allowed to enter the park, Kegirl presents a video message by Tennosuke. While Beauty and Heppokomaru are distracted by Bo-bobo and Don Patch's hijinxs, she tells them to pay attention to his announcement.

When Don Patch notices that there's not enough potatoes in his curry, he demands an explanation from Kegirl, who apologizes. Not satisfied with her apology, Don Patch takes her mask off, revealing that she's a "specialty education mom" ("rent-a-mom" in the English dub), who forces Don Patch to study. As the rebels head inside the park, Don Patch asks her if he can go too, to which she says no.

During a brief intermission of the rebels' battle with Ferris Wheel, Kegirl is seen giving out balloons to the park guests. 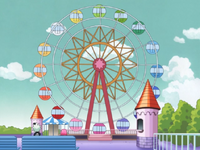 (観覧車): A large multi-colored ferris wheel, guarded by Ferris Wheel (the A-Block employee). Bo-bobo and Don Patch fight him in one of the cars. After three turns on the ride, Bo-bobo finally defeats Ferris Wheel. 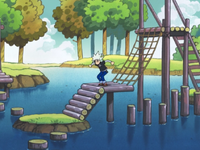 (水上アスレチック, Minakami Asurechikku): An obstacle course above a pond where piranhas will jump out and attack any unsuspecting people. Heppokomaru goes here during the rebels' search for Tennosuke, only to be attack by a group of pirahnas and a fish soldier who he defeats easily. 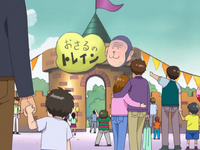 (おさるのトレイン, Osaru no Torein): A small train ride where guests of the amusement park can ride past monkeys. However, the ride goes incredibly fast, to the point where guests could fly off the train if they don't hold on. In the midst of Bo-bobo's battle with Ukikki, the tunnel is destroyed when a giant baby emerges out of it. 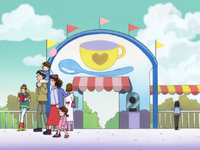 (コーヒーカップ, Kōhīkappu)/Teacup Rides: An attraction based on the teacup rides from Disneyland. This is where Don Patch (as Patchimi) meets up with an old flame: U-kun (who has since become guardian of the attraction: 6). As guard of the attraction, the coffee cups are usually off-limits to anyone else other than 6. 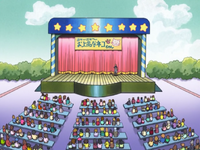 A small show, where guests come to watch a cat eat with excellent table manners. While Bo-bobo regroups with Don Patch during the remainder of their search for Tennosuke, Beauty becomes so engrossed in the show that she gets separated from him. 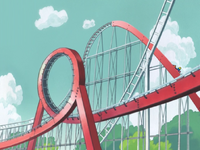 (ジェットコースター, Jetto Kōsutā): A large roller coaster. After defeating the attraction's guardian: Haketchatsu Teruno, Bo-bobo and Don Patch perform a "Turtle Rap" on the ride, up until they fall off when the ride they stand on top off loops.

While Bo-bobo and Don Patch ride Jet Coaster, Beauty is seen sitting at a nearby cafe area, contemplating that she was so engrossed in the Elegant Cat Show, she lost sight of him. 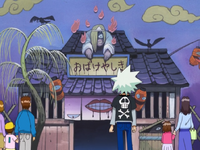 (おばけやしき, Obake Yashiki): A walk-through haunted house where the rebels battle the attraction's guardian: Katsu. The haunted house is home to many yokai spirits. It is later destroyed by Heppokomaru's invoked Baby Mode. 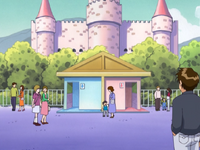 A set of two male and female restrooms, where the rebels find both Tomohiro and Tennosuke.

Don Patch goes to this location to use the bathroom, only to find Tomohiro, who is forced to eat spaghetti inside a restroom stall while surrounded by many raining cats. Horrified by this, Don Patch let's out a loud scream. The rest of the rebels come to his aid, only to find him doing a Purukogi dance with the cats. Don Patch then kicks Beauty out and berates her for being in the men's restroom. After Bo-bobo finds Tomohiro, the rebels search the restroom for Tennosuke, who shows up and pretends to help them find him.

Locations
Retrieved from "https://bobobo.fandom.com/wiki/A-Block?oldid=18359"
Community content is available under CC-BY-SA unless otherwise noted.