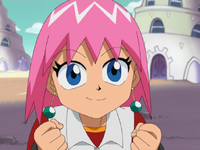 Beauty is the female heroine of Bo-bobo's group and usually the only girl when Torpedo Girl isn't around. Unlike the puns used for many of the characters, she received her name because the manga writer was looking at a video tape of the movie "American Beauty" when he created her character. She is one of the few sane characters who is the first to join Bo-bobo. Beauty also serves a "damsel in distress" during some story arcs.

She is a kindly, helpful girl, but is often exasperated by Bo-bobo's odd behavior or the behavior or actions of others, usually with the same face. She's the only person in the group that doesn't fight (Except in the video games, which are not considered canon), but still criticizes the others' fighting styles.

Beauty worries about her friends' safety and finds them as her own family.

Though finds Bo-bobo crazy, she idolizes him greatly.

The only person who seems to truly not stand Beauty is Don Patch. He sees Beauty (and for that matter, any girl) as a potential rival for the "heroine" role. He has even gone as far as to try to harm, or even try to kill her (each time, Don Patch fails in a hilarious way). Although there have been a couple of times where Don Patch saved Beauty out of genuine concern, indicating that while hates the fact that Beauty has the heroine role he does see her as a friend.

Beauty and Heppokomaru have a romantic but quiet relationship. She loves him dearly and gets sad when he or her other friends are hurt. She and Heppokomaru have had some very romantic scenes like when Gunkan (Captain Battleship) tried to attack Beauty with the attacking ducktail nose hair, Heppokomaru pushed her out of the attack, which led to much blushing along with Heppokomaru asking if Beauty was alright and Beauty thanking him.

In Shinsetsu, she meets Heppokomaru's little sister Pokomi. At first, Pokomi does not like her at all, believing that she was evil, but she eventually warmed up to Beauty. Pokomi even calls her "Onee-chan" (Big sister in Japanese), and turns to Beauty when she gets sad.

In her first appearance, Beauty was the only citizen to still have hair after the attack of the town she lived in. She, along with Pickle, initially wanted to join Bo-bobo because she sought a life of adventure. Bo-bobo let her join him, making Beauty the first rebel in Bo-bobo's group.

During her first adventures with Bo-bobo, Beauty gets kidnapped by Hair Hunter Tarashi. Bo-bobo teams up with Don Patch, and the two go off to H-Block to find her kidnapper, only to find out that he hardly ever goes to the fortress. However, Beauty also encounters Heppokomaru, who uses a 'Stink Bomb' and easily defeats Tarashi. Beauty was never able to thank him or ask for his name during this rescue.

Later, Heppokomaru joins the rebels, but Bo-bobo does not trust him completely, and thinks Heppokomaru is an evil person, since the Soup Alien was after him for not eating rice soup, and Battleship accused him of being a heartless evildoer. But Beauty stands up for him and explains to Bo-bobo that Heppokomaru saved her hair from the evil Hair Hunter. She gets turned into a doll afterwards by one of Battleship's minions and is then taken to Pomade Ring. Once the floating fortress has fallen, Bo-bobo finds her, and turns her back into a human.

During the Reverse Maruhage Empire arc, she travels down an underwater tunnel with Don Patch and former enemy Ujikin TOKIO. She surprises everyone by standing up to the guard of the tunnel, Higusari Seijuro, and almost fights him! Luckily, Halekulani opens up the tunnel and finishes off the villain.

Beauty gets her biggest scenes during the Hair Kingdom arc. She does not do much at first, but in the battle between the rebels and 5th district general Icen, it is revealed that Softon is her older brother. Later, she is almost killed by 1st district leader, Shigeki X, but is saved by fusion warrior Adult Woman. During the battle with Bo-bobo's evil brother, Bibibi-bi Bi-bibi, the afro warrior is killed, leaving only his sunglasses behind. Beauty finds them, and they reveal to her that they carry a large portion of Bo-bobo's power. After putting them on, she delivers a sucker-punch to Bi-bibi's gut and then slams his head into the ground, in revenge for Bo-bobo's death! Beauty probably could have beaten him, but the glasses lose their power, and fall off of her head! Bi-bibi then beats her up, but he doesn't kill her. Bi-bibi is finally defeated by powered-up versions of Ikarin Patch and Bo-bobo.

In Shinsetsu Bobobo-bo Bo-bobo, she is the first character seen in the new series. Just like in the original series, Beauty is attacked by a hair hunter, but luckily Bo-bobo is nearby, and he makes short work of the evil soldier.

Beauty cries when they encounter Heppokomaru, finding out that he is now a member of the Neo Maruhage Empire (he still has his hair though), and is out to kill Bo-bobo! It hurts her even more when she tries to reason with him, only to get a slap in the face! Later, at Holy Spaghetti Academy, right before Heppokomaru is about to swallow the demon pill, she slaps him so he can stop the evil he is doing, but instead he pushes her aside and swallows the pill. While Heppokomaru is in his demon form, he is defeated by Shinsetsu BoboPatch, and turns back to normal. Heppokomaru begins to cry for hurting Beauty and Bo-bobo, but luckily for him, they forgive him. Beauty is then attacked by another enemy, Babuu, but she is defenseless since Bo-bobo is injured, but Heppokomaru gets in front and takes the attack even though he is punched severely and begins bleeding. This made Beauty very sad, and she began crying for him to recover.

Later, Beauty and Dengakuman are captured by Shiryūen Kamara, one of the Three Great Kings. They are then sent down to the bottom of his "Doodlebug Spiral" where they will be run over by two trains if the rebels fail to defeat Kamara. Unfortunately, the rebels underestimated Kamara's power, and the trains collide, but miss Beauty completely! Heppokomaru returned and saved her from being run over (the same could not be said about Dengakuman), and he defeats Kamara easily.

At the end of Shinsetsu, Beauty and Heppokomaru leave the group together.

In terms of fighting, Beauty has only fought once throughout the entire series (the only exception being the fight against Bi-bibi). There have been other times (during battles against Higusari Seijuro or Ruby) where she almost fought, but somebody else interfered.

Despite never fighting anyone, Beauty fights in the video games, though most fans will not consider this to be canon.

Note: While Ganbarism means the principle of "doing your best", the "rizumu" part of this technique skill translates to "rhythm", in connection to the gameplay mechanic used to execute this technique.