A five-man squad under the control of both Bababa-ba Ba-baba and Bibibi-bi Bi-bibi, the Dokkyun Suicide Corp serve as a welcoming committee for visitors of the Hair Kingdom. Blocking the train path into the kingdom, they forcefully issue out brands for new visitors that make them show their love for Bi-bibi. However, they end up challenging Bo-bobo thinking it would be an easy victory without knowing that he was one of the five children of the hair, sealing their downfall in an attack involving various horror stories. 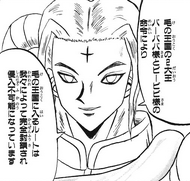 (デイウス, Deiusu): A maniacal man with horns on his head, he is the de-facto leader of the Suicide Corp. His main attack is "Red Gunmaster".

(インビー, Inbī): The only female member of the team, she has an interest in cute things like Dengakuman. Her attack is "Pink Ribbon Energy".

(カモ崎ガル平, Kamozaki Garuhei): A duck who works as a member of the team and likes to eat fish. His main attack is "Green Duck Panlid".

(ピグムック, Pigumukku): A strange creature in sunglasses with antenna and completely covered in curly hair. Because of the coincidence of his imagination to the member, Don Patch thinks that he's actually Bi-bibi and challenges him during the Bo-bobo team's fight with the rest of the suicide corp. His main attack is "O – HAGI Shoot".

Working together as a team, four out of the five use their "Sentai Shinken" (戦隊真拳; Fist of Sentai) to attack any oncoming opponents either in battle or in their Takoyaki entrance fight.