Appearing to be a clone of the original Bo-bobo while claiming to be the real one, Black Bo-bobo's true identity is a mystery. His appearance is exactly like Bo-bobo's, only darker: his shirt, pants and even his afro are completely black, while his skin is a darker color than even the already dark Bo-bobo. Unlike the first dark clone, Jatī, whose personality was completely different from Beauty's, Black Bo-bobo's personality matches Bo-bobo's almost exactly.

Black Bo-bobo is a clone created by the Neo Maruhage Empire. He in charge of the "White Masked Gang of Deadly Illusions Squadren", but he is never released from his test tube despite this. He is seen in a lab being controlled by the Neo Maruhage Forces, and overseen by fellow Daioh member Babuu. Black Bo-bobo is eventually let out of his tube thanks to Jati, who easily defeats Babuu, and enlists the clone into Hīragi's all Hajikelist Squadren,... or at least that was the plan. During the ruckus, the dark clone escaped, where he ironically ran into the real Bo-bobo at a park!

When he first meets the real Bo-bobo, the two are in shock, and greet each other through random hajikelist actions. At first, Black Bo-bobo seems rather friendly with his light-colored counterpart, but when Hiragi and Jati arrive, he joins the raid against the Hajikelist Trio in the Shinjuku Ward. During the fight, he continually bombards Bo-bobo with random attacks, some of which are Bo-bobo's. Black Bo-bobo eventually tricks Bo-bobo into trying to eat his afro, which comes to life and swallows him, leading to an unexpected fusion.

When the smoke clears, the new being left standing calls itself Gemini Bo-bobo (ジェミニ•ボーボボ, Jemini Bo-bobo). The fusion looks exactly like both Bo-bobo's, but the left half the body resembles the original, and the right half resembles Black Bo-bobo. The fusion then begins to attack Tokoro Tennosuke and Don Patch with its "Kyūkyoku Hanage Shinken" (Fist of Ultimate Nosehair). Gemini Bo-bobo has more than enough power to defeat the last two rebels, but thanks to an unfortunate decision on Hiragi's part, Don Patch turns himself into Don Patch, and angrily challenges him. While the two continually exchange blows, it would seem that Gemini Bo-bobo's attacks have more effect and power than Don Patch's, that is until the angry warrior strikes the fusion very hard in the stomach, causing it to split right down the middle. The fusion is separated, and the original Bo-bobo retaliates by fusing with his two partners to create Shinsetsu Bobopatchnosuke. The new fusion infects the Hajikelist Squadron with "Majide!?", during which Black Bo-bobo is "revealed" to be an odd looking creature (with a striking resemblance to Mesopotamia Civilization). He and the other Hajikelist Squadron members are then run over by a runaway scooter, defeating them.

Black Bo-bobo wields the power of "Black Hanage Shinken" (ブラック鼻毛真拳; "Fist of Black Nose Hair"), which is virtually the same as regular "Hanage Shinken" (Fist of Nose Hair). On top of this, he possesses every ability that his light colored counter part has, including odd Hajikelist abilities and the all powerful Nosehair Seal. 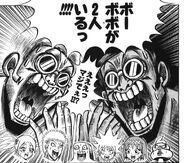 Bobobo meets Black Bobobo
Add a photo to this gallery