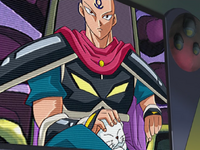 (テル, Teru): The supreme lieutenant of the Hair Hunters, above even the top seven block leaders.

He is first seen during a block leader conference at A-Block's original base, via television screen. He tells the other block leaders that he gathered them to discuss the matter of Bo-bobo, who recently took down G-Block (on his way to G-Block in the anime). While mentioning the Assassination Squad is getting restless, his mother is heard telling him to come to dinner and calls him by his real name: Tsutomu (つとむ), much to the embarrassment of the block leaders.

After obliging, he tells the block leaders not to pay attention to her and continues to discuss the next item on the agenda, which are their winter uniforms. After being interrupted a few more times, he yells at his mother to keep quiet, only for her to appear on camera, and scold and beat him with her ladle, much to the block leaders' horror. 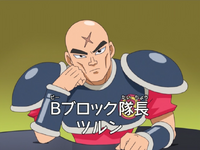 Tsulun (ツルン), also known as Smooth in the English manga[1]: Leader of B-Block. He and his entire force are later defeated offscreen by Gunkan's assistant, Suzu. He also appears as a side-boss in Bobobo-bo Bo-bobo Ougi 87.5 Bakuretsu Hanage Shinken.

(キテマス, Kitemasu), also known as Feeler in the English manga[2]: Leader of D-Block. This block leader wears a bunny suit (his pajamas) on the job. He also appears as a side-boss in Bobobo-bo Bo-bobo Ougi 87.5 Bakuretsu Hanage Shinken. 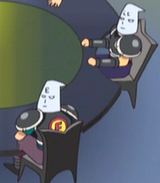 Also known as Masked Man in the English manga[3]. Two leaders of blocks E and F, who are seen at the Hair Hunter meeting. They are shown as silent cloaked members, wearing masks that are similar to those of the Ku Klux Klan. 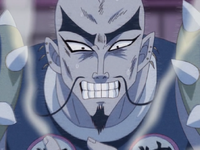 The leader of J-Block, who Hatenko betrayed 5 years ago. He and his troops are LOCKED by the time we see him. 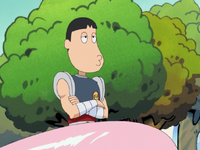 (ひさし君, Hisashi-kun)/Boss Bob: The long-faced leader of M-Block, he rides around in a bobsled pushed by another Hair Hunter. He is easily defeated by Hatenko and his "Kagi Shinken" abilities. In Bobobo-bo Bo-bobo Majide!!? Shinken Shoubu, he is the boss of Bobsleigh Mountain.

(ユッキー村雨): A former leader of D-Block. According to Bo-bobo, he competed against Murasame in a skiing contest 20 years prior, alongside Don Patch, Hatenko, and Be-bebe. Murasame was also Tokoro Tennosuke former commander, back when he was a member of D-Block. 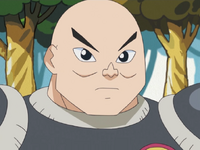 (コデブン): Leader of the Hair Hunt River Block (Fish Expert). Kodebun is able to read the minds of his opponents. He is first encountered when Bo-bobo goes to search for food and brings him back in a bucket, mistaking him for a fish. Despite Don Patch's hajike antics, he is able to read his mind and tricks him into playing with a cucumber. Before Kodebun is able to attack Beauty, he is stopped by King Nosehair, who's sudden appearance causes him to let his guard down, allowing him to be defeated by Bo-bobo. 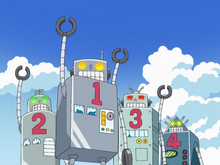 Robo Team (ロボチーム): Four separate robots who, together, make up the leadership of the Robo Block (ロボブロック), a beach-front property area. When an encounter between one of them and Don Patch is noticed by Hatenko, Bo-bobo and the others are forced to fight all of them together in various team activities. However, it turns out that Robo #1 is also known as Roscal (ロスカル) and was once a small robot befriended by Don Patch. In Bobobo-bo Bo-bobo Majide!!? Shinken Shoubu, they are the bosses of Robot Land.

While Robo Block is a separate Hair Hunt block in the manga, the anime makes them a "first line of defense" for Z-Block.

(許して仮面, Yurushite Kamen)/I'm Sorry Masked Man: The form the four robots of Robo Team become when they all fuse together. Consequently, Bo-bobo and Don Patch can do the same. After the both of them unite, the battle ends in a stalemate.