C-Block (Cブロック) is one of the many bases of the Maruhage Empire. It serves as the forth strongest letter-base. Within C-block resides the terrible Aitsuhage Tower, a five-floor tower, with each layer more deadly than the last. 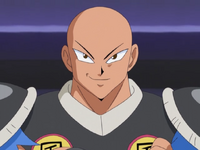 (疾風のゲハ, Shippu no Geha), also known as Dlab in the English manga[1]: leader of C-Block and guardian of the fifth floor of Aitsuhage Tower (Gale Room).. Geha has the power to manipulate wind scythes like a Kamaitachi (a mythical wind weasel).

Geha is first seen at a meeting between block leaders A through F about the Bo-bobo threat. Later at C-Block, after Bo-bobo has defeated his men, Geha manages to trap the afro warrior (along with Don Patch in a cyclone. Geha then sets his sights on shaving Beauty's hair, only to be defeated by Heppokomaru. He later gets up, but is consumed by Wall Man. 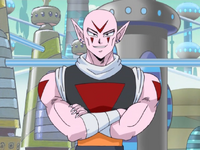 (ゲチャッピ): a pink, demonic-looking member of C-block. He was first seen stalking Bo-bobo and his friends, in an attempt to make Bo-bobo's hair fall out with his "Hairloss Beam". Instead he winds up hitting Beauty (and in the process, Don Patch) with it instead. Bo-bobo demands him to remove the beam's effects, but Gechappi runs off, telling them that the only cure can be found at C-Block.

He is next seen on a train, coincidentally the one his two victims have chosen to get to C-block. Though he no longer shows interest in them, Don Patch can't forgive him for affecting him with his Hairloss Beam, and angrily challenges Gechappi to a fight with his Don Patch sword (a green onion), only to lose miserably. Shortly afterwards in the manga, Gechappi was defeated by the "Don Patch Hammer" (another green onion).

His role is slightly extended in the anime, where not even Don Patch's hammer can defeat him. Shortly, Bo-bobo boards the train, and Gechappi hits him with his Hairloss Beam, but Bo-bobo cancels out the effects by praying. Gechappi is then defeated by a combination of a waterslide and an attack from the "Fist of the Nosehair". 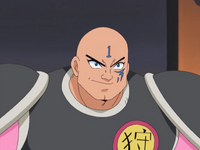 (テスイカツ) is the Guardian of the "Red Hot Room", the first floor of C-Block's Aitsuhage Tower. He is a bald hair hunter with tattoos on his face, including a "1" on his forehead, to signify that he is the first guardian. Expecting Bo-bobo to arrive at any moment, Tesuikatsu is confident that he will easily crush the afro'd rebel, until Bo-bobo runs him over with an ambulance. The surprise (and unintended) attack fails to knock Tesuikatsu out however, and, while the rebels had their backs turned, he easily captures Don Patch in a dryer. Bo-bobo swiftly defeats him afterwards.

In his defeat, Tesuikatsu tells the rebels that there are four more rooms above them, each one more hellish than the last. He shows the rebels the stairs, hoping that they will meet their doom on the next floor, but the rebels find an elevator instead. Tesuikatsu pleas for them to use the stairs, which they do; due to a hajikelist gag involving a chicken beauty contest. Don Patch throws a live grenade into the elevator, blowing it up and killing Tesuikatsu in the process. In the anime, he is only blown against the wall.

He is not to be confused with Katsu of A-Block. 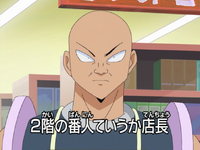 (店長, Tenchou): Guardian of the "Thunder Room", the second floor of Aitsuhage Tower (which is a video store he owns). Bo-bobo and Don Patch briefly worked at the store, but the manager faces Bo-bobo's wrath when he tries to fire one of his other employees, a paramecia named Keseran Paseran. 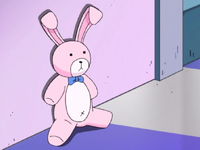 (ウサギのウサちゃん, Usagi no Usa-chan)/ Vicious Velvet the Rabbit: A stuffed rabbit who stands outside the "Rapids Room" as 3rd floor guardian of Aitsuhage Tower (another video store exactly the same as the Shop Manager's). Everyone but Beauty ignores him. After mouthing off to Beauty, she ties his ears into a knot. He is also a mini-boss in Bobobo-bo Bo-bobo Secret Technique 87.5 Explosive Fist of the Nosehair.

Softon serves as the guardian of the "Jet Black Room" of C-Block's "Aitsuhage Tower". Given his power and that his room was right below Geha's, some fans assume that he was the vice leader. 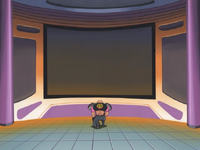 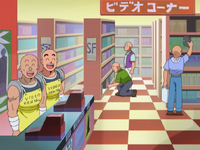 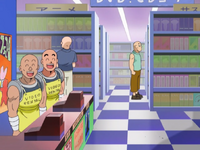 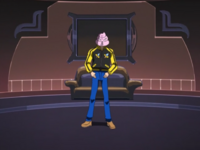 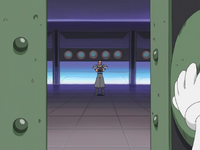 Locations
Retrieved from "https://bobobo.fandom.com/wiki/C-Block?oldid=21266"
Community content is available under CC-BY-SA unless otherwise noted.