Cyber City (サイバー都市, Saiba Toshi) is a location in the anime and manga Bobobo-bo Bo-bobo.

There are rebels, though not as major as Bo-bobo, that provide some menace to the Maruhage government, so when being shaved isn't enough then they are given a life sentence to Cyber City. A hellish, cybernetic prison island made right in the middle of the ocean it is where most of the enemies of Tsuru Tsurulina IV are imprisoned and shaved of their hair; the jail masters even design sporting events to gamble on and set an example to all who challenge the Maruhage Empire of its merciless nature. Even if one tried to escape, it is so far away from shore, that very few animals are able to travel there. This prison metropolis is led by Giga, the second in command of the 4th, and an art master who is accompanied by two beautiful women. It is a stated fact that Giga is just as strong as the current Emperor. The cruel ruler of Cyber City has 6 major guards known as the 6 Cyber Knights who are rumored to be as powerful as the Four Heavenly Kings and one is powerful enough to give unlimited energy to keep the metropolis running.

(電脳６闘騎士, Dennō Roku Tōkishi)/The Six Cyber Knights: Six powerful warriors who serve Giga, each of whom controls one of the various execution stands in Cyber City. Each of these is televised to the locals to make examples of them to the others. According to Bobobo-bo Bo-bobon, the Six Electric Brain Warriors ranked from strongest to weakest are: J, Shibito, Wan Ronga, Pana, Sonic, and Carman.[1] 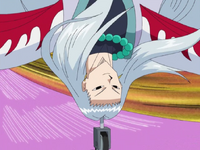 (パナ): Pana is a man with long, white hair, and a wheel on his head. He spends most of his time upside-down. He is one of the Six Electric Brain Warriors and the guardian of the "Sphere Prison Execution Stand", where he kills opponents within a sphere made up of roads upon which he rides on with the wheel on his head. His primary attacks include spinning rapidly (either upside down or right-side up) while using circular blades or attacking with his "Lightning Ball", a massive ball of energy which, if one is hit by it, will begin to drain one of his life force! When Bo-bobo and the others arrive, Pana underestimates Bo-bobo and the others, and tries to kill them right off the bat. However, Bo-bobo distracts him with some lesser attacks, and manages to sneak his nosehairs all across the battle arena. He then pulls them all together and does critical damage to Pana with his "Nosehair Spider Web" attack. Before losing consciousness, Pana tells the rebels that the other Electric Brain Warriors will avenge him. 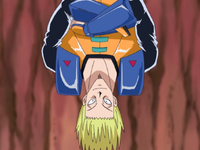 (ソニック, Sonikku): Sonic is a man with orange and blue armor, and spiked up yellow hair. He is one of the Electric Brain Warriors and the guardian of the "Bungee Execution Stand" (Bungee Jump Hair Hunt Stadium in the anime dub). His method of death involves bungee matchups between several opponents and himself and his underlings Super Rabbit and Despair-kun. However unlike everyone else there, he has a special rocket attached to him preventing him from ever falling. As the battle goes on, Tokoro Tennosuke and Despair-kun both get their bungee cords cut and fall. Bo-bobo activates "Bo-bobo Wonder Box" in order to prevent them from falling to their deaths (anyone who falls in the box will either gain a new form, or a new aspect on life). Sonic is defeated when Tennosuke seals him and his henchmen in a bottle. 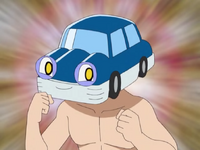 (クルマン, Kuruman)/Otto: A man with a blue car for a head, and wears black and yellow striped pants. Carman is one of the Six Electric Brain Warriors and the guardian of the "Hell Training Institute", where he controls a large force of possessed cars, traffic signs, and zombies, all of whom handle most of the fighting for him. However, despite all of these means at his disposal, he is not much of a threat. He also enjoys writing haiku, and his biggest pride is his car-shaped head (which, due to its size, hinders him in battle).

After the fall of Sonic, the rebels are split up, With Softon, Dengakuman and Bo-bobo winding up in Carman's Driving institute. During his fight, he proves to be an ineffective opponent, as Softon and Bo-bobo spend most of their time smacking him around (even Dengakuman joins in by getting inside of his head and peeing on the seat right when his head turned into a Ferrari)! The rebels find that his weakness is his obsession with preventing his car face from being damaged, which is how Bo-bobo and Softon damage him the most (at one point, his head is so smashed up that it becomes an airplane). As the fight carries on, it becomes more and more obvious that he is the weakest of the Electric Brain Warriors. Carman is about to give up, until Giga watches the fight on a giant television screen. With his boss watching, Carman becomes anxious to succeed in his fight, but winds up getting his face smashed into the screen by Bo-bobo.

Carman appears in Shinsetsu Bo-bobo during the Cyber City raid. He, Despair-kun, and Super Rabbit participate in a bizarre talk show when the IXEX arrives. 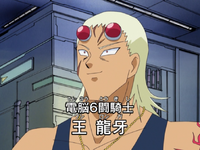 (王・龍牙, Wang・Ronga): One of the Six Electric Brain Warriors of Cyber City. Unlike the rest, he does not guard any arena. Instead, he spends his time looking for rebels of the Maruhage Empire, and then dragging them back to Cyber City. He pays close attention for Shinken users, so that his boss Giga can turn them into abstract statues for his collection.

Wan Ronga is a user of "Rōgoku Shinken" (牢獄真拳 Fist of Jail). This ability allows him to instantly imprison his opponents in cages. He can also attach heavy weights onto his opponents limbs, making it difficult for them to fight back or run away.

He is first seen in Hallelujah Land after Heppokomaru emancipates the slaves. Seeing that he is a shinken user, he drags him back to Cyber City.

Ronga is later seen taking time off during Bo-bobo's battle with the other Electric Brain Warriors after another capture run. Unfortunately, one of those he had captured was Hatenko, who lazily escaped his prison and challenges the jailer to a fight. Hatenko brushes off all of Ronga's attacks and defeats him by "locking" his entire body.

Wan Ronga is seen again in Shinsetsu Bo-bobo during the Cyber City raid. He and J try to fight off Porusutoroi, but the IXEX member handles them with no difficulty, and the two are dragged off to be worked like slaves for their failures in the past. 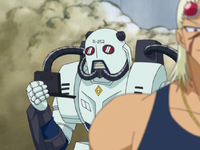 (王・龍牙の部下, Wan Ronga no Buka): Two soldiers of Cyber City that are seen with Wan Ronga when they first spot Heppokomaru and take him to Giga. They have a monitor in which they to keep track of each fist master and hunt for them. 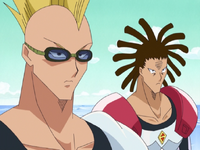 (スーパーラビット, Sūpā Rabitto): One of Sonic's subordinates (the other being Despair-kun) on the "Bungee Execution Stand", he is an anthropomorphic pink rabbit with the word "SPEER" written on his belly. Although he has a tired expression, he uses powerful karate moves when his eyes are fully open, even in the midst of a bungee jump. He at first causes trouble for Bo-bobo's group, but Bo-bobo scares him with a lion coming out of his afro. Super Rabbit, alongside his two comrades, are defeated when Tokoro Tennosuke seals the trio away in a bottle.

Both Super Rabbit and Despair-kun are later seen worshiping Softon as he uses his power to keep Cyber City from sinking. They also show up to assist Bo-bobo against the Hair Hunters of the Former Maruhage Empire, but they are rejected by Tennosuke.

Super Rabbit makes brief appearances throughout Shinsetsu Bobobo-bo Bo-bobo. His most notable scene is participating in an odd talk show, alongside Despair-kun and Kuruman. 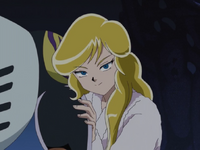 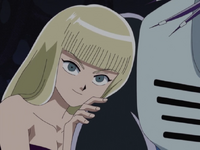 Two blonde women who are always with Giga, they're basically there to back him up for extra support. During the battle with Giga, Dengakuman temporary sides with them (while dressed in a bikini). Shortly after Giga's defeat, he scolds them for for serving him. Their names are unknown. 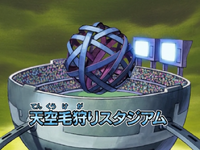 (球獄処刑場, Kyūgoku Shokeijyō), also known as the Aerial Hair-Hunt Stadium (天空毛狩りスタジアム, Tenkū Kekari Sutājiamu) in the anime: A large sphere made of intersecting roads, that only high speeds could possibly travel up. Pana guards this area. This area is usually where prisoners of Cyber City are executed. People can also sit in the stands surrounding the arena, and bet on the survival chances of Pana's victims! 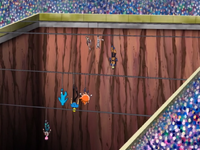 (バンジー処刑場, Banjī Shokei-ba), also known as the Bungee Hair-Hunt Stadium in the anime: Numerous bungee cords suspended over a bottomless pit. Another place where prisoners are most likely executed. Sonic and his subordinates, Despair-kun and Super Rabbit guard this area, and will try to cut their enemies bungee cords. There are stands in the background, hinting that this arena is also a town spectacle.

(書獄処刑場, Shogoku Shokei-ba), also known as Writer Prison Hair-Hunt Stadium (書獄毛狩りスタジアム, Sho Goku Kekari Sutājiamu) in the anime, and Library Hair-Hunt Stadium in the English dub: A very spacious room, filled with giant books as far as the eye can see. Shibito guards this area and uses the giant Kanji (Japanese characters) as weapons. It is unknown where this arena is located. The background gives off a dark brown color, hinting that they may be underground or inside of a building. 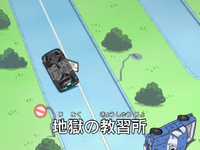 (地獄の教習所, Jigoku no Kyojūsho), also known as Driving School Stadium in the English dub: A large area made of roads. This area is guarded by Carman, who uses traffic signs and cars as weapons. The corpses of previous victims are used to attack opponents as well. There is also a large television screen in the center so that Giga can observe each battle in his spare time. 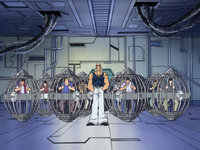 Wan Ronga's area, where he brings new prisoners to the city. 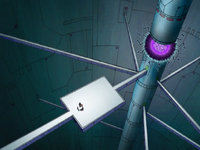 (サイバー都市・核, Saiba Toashi Kaku): The center of Giga's tower. It is a mechanical room, with not much decoration other than a large platform in the center, where J maintains the city's power. He also guards this room, and if J leaves, then Cyber City will have a drastic meltdown. 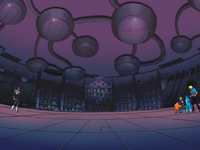 The top of Giga's tower, where he spends most of his time. Here, Giga is kept company by his two females, and keeps an eye on his collection of Shinken users transformed into objet d'art. 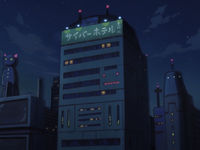 Locations
Retrieved from "https://bobobo.fandom.com/wiki/Cyber_City?oldid=20041"
Community content is available under CC-BY-SA unless otherwise noted.