While preparing to fuse with Don Patch into BoboPatch, J uses his Super Fist of the Black Sun to teleport Dengakuman in the way. Dengakuman knocks Don Patch out of the way, who promptly glides into Bo-bobo's pants, creating the unexpected female fusion: Denbo. Unlike most fusions, Denbo lasts for six hours (five hours in English dub) instead of 1 minute.

Denbo is a female, with blonde hair going down her back before splitting into two separate braids, a magical girl outfit complete with blue blouse with exposed midriff, blue mini-skirt and white go-go boots, wing shaped barrettes and a heart shoulder guard on her left shoulder.

Like the magical girl-styled heroine they've become, Denbo has a cheerful, optimistic attitude and is always trying to make people happy. But while she does seem slightly air-headed, she is prone to fits of violence and takes it out on the nearest opponent. For some reason, she also has the ability to speak Korean. 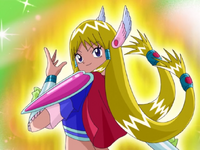 (スーパー田ボ, Supa Denbo): An upgraded form of Denbo. This form is accessed when Bo-bobo gains his Super Bo-bobo abilities.

After The Three Sacks fuse together through their Dark Fist of Three Sacks into a more powerful form, Bo-bobo (in his "super form") decides to use a fusion to handle this. After a scramble with Don Patch and Tokoro Tennosuke to get inside Bo-bobo's afro, Dengakuman wins, which results in Bo-bobo becoming a more powerful Denbo.

Similar to the original Denbo, with slight adaptations, her wing hairclips are now double and she now adorns a longer skirt with hearts on it. She also has a slightly higher pitched voice in the English dub, but her personality is basically the same as the original Denbo.

The Playoff and the Reverse Maruhage Empire

I Will Sing For Everlasting World Peace☆ (永久の世界平和のために歌いま～す☆):

Denbo, and her upgraded form: Super Denbo, appear in Jump Ultimate Stars as part of Bo-bobo's special attacks, where she attacks the opponent with her nunchucks, while Super Denbo uses Emerald Heart.