(邪血館, Jaketsukan)/ Evil House of Blood: Evil Blood Mansion is a mansion that acts as the Maruhage Empire's trap. Hatenko lures Bo-bobo and the others there, saying that it is the location of a reception party in honor of Tsuru Tsurulina IV's recent wedding. In truth, it is the base for some of the Maruhage Empire's strongest assassins and one of their top scientists. The mansion itself is a death trap, loaded with traps and evil henchmen in almost every room. It has gained the reputation of being so dangerous, that not even a mouse can escape alive.

In Bobobo-bo Bo-bobo Seriously!!? True Fist Match, the Evil Blood Mansion makes a return as one of the attractions in Hallelujah Land. 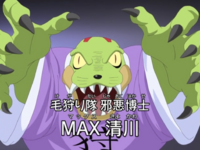 (MAX 清川, MAX Kyokawa): The "evil doctor" of the Hair Hunters, this lizard man captures Bo-bobo within a strange bio-liquid (which Don Patch and Kappa make into soup) and brainwashes him into fight against his friends. It seems to be a success, as Bo-bobo goes as far as to attack Beauty, and Don Patch is forced to fight against him. However, at one point, Bo-bobo reveals that he was just kidding, as according to Heppokomaru, it is impossible to control Bo-bobo, and Kyokawa is put on trial for the deaths of Guri and Gura.

He is also a boss in Bobobo-bo Bo-bobo Seriously!!? Shinken Battle.

(グリ) and (グラ), also known as Grin and Bareit in the English dub: Two sentient cell phones who serve as Tsuru Tsurulina IV's strongest assassins, sent to pursue the rebels to the Evil Blood Mansion. However, the impact from their crash-landing damages Gura, while Guri explodes while trying to repair him.

Locations
Retrieved from "https://bobobo.fandom.com/wiki/Evil_Blood_Mansion?oldid=20709"
Community content is available under CC-BY-SA unless otherwise noted.