Before any participants can make it to the meeting place, they would have to go through a different number of courses, each with their own guardian. There are at least 33 known courses, but only two of them have been shown in the series. 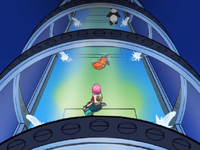 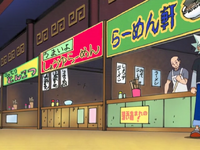 (死のラーメン街道, Shi no Rāmen Kaidō): Course #33 of the Fifth New Emperor Playoff Meeting Base. This course features many different ramen food stands. The guardian of this course is Menma. 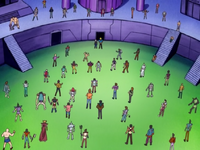 The meeting area where all of the participants who made through the courses wait for the current emperor to formally begin the preliminaries by introducing the location of the actual tournament. 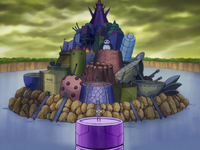 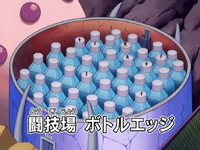 (ボトルエッジ, Botoru Ejji): An arena consisting of giant water bottles. It is said that those who fall off even one bottle will die. 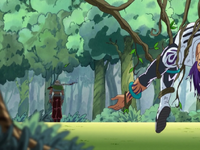 An area surround by many trees. Not much is known about this area, other than the fact that it serves as a battle stage where Crimson defeats both Giga and Hanpen. 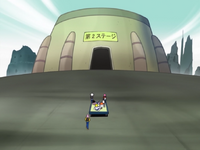 One of the arenas in the New Emperor Playoffs. Not much is known about this arena, as it is instantly blown up by Halon Oni and Slim, the moment the rebels arrive. Halon Oni transforms Heppokomaru into a giant in place of this arena. 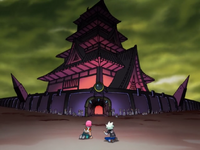 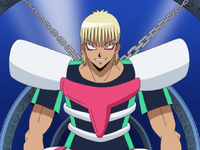 (火鎖清十郎, Higusari Seijūrō)/Blond Chainey: Guardian of Course #26 (Swift Hell-Depth Tunnel) in the elimination course of the Fifth Mauhage New Empire Playoff". This guardian uses the chains he's bound to, as a means to attack any intruders who enter his passage. Although Beauty, Don Patch and Ujikin TOKIO try to take him down, he is easily crushed by Halekulani's money attack. 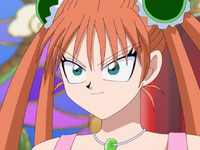 (メンマ) Menma is a woman with a pink halter top and baggy jeans; and has a hairstyle of orange hair tied into four long threads, with a ball ending each point. She is a member of the fourth generation of the Maruhage Empire.

Menma fights solely through the use of "Ramen Shinken" (Fist of Ramen; ラーメン真拳). Unlike most Shinken abilities, Ramen Shinken acts as more of a contest than an attack. During this contest, Menma creates a bowl of ramen, and forces her opponents to do the same (though her opponents presented things that were not even made of ramen). The "ramen" is then put onto a round table, where it spins around, and is finally stopped in front of (at least) one of the participants. The participant must eat everything in front of him, and, to further make it difficult in their pursuit of victory, anyone who eats Menma's ramen noodles will have their innards blown up (the anime changes this to the victim temporarily turning to stone, removing them from the contest).[1] However, there are two ways to defeat Menma's technique; the first is to get Menma to admit that someone else has made better ramen noodles than hers, or Menma must refuse to eat whatever is in front of her.

During the Fifth Maruhage New Emperor Playoff, Menma serves as the guardian of Course #33 (Death Ramen Highway), one of the rooms that led to the main arena of the Emperor Playoffs competition. When Bo-bobo and Heppokomaru encounter her, she has already defeated J with ease. Next, she challenges the two rebels (along with the Three Major Civilizations) to a ramen eating contest. At first, things go rather smoothly for Menma, as her opponents can't even stomach their own creations! However, during the second round of the contest, Bo-bobo uses his nose hairs to stop the revolving table so that Indus Civilization lands in front of Menma. Since Menma won't bring herself to eat a living firecracker, she loses the match. 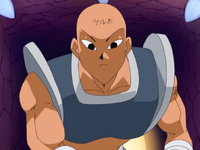 Locations
Retrieved from "https://bobobo.fandom.com/wiki/Fifth_Maruhage_New_Emperor_Playoff_Site?oldid=20821"
Community content is available under CC-BY-SA unless otherwise noted.