G-Block is the eighth strongest letter base, and the weakest of the main seven letter bases in the Maruhage Empire. It is stationed near Inafu Village, where it has a moderately successful hair hunt until Bo-bobo shows up. 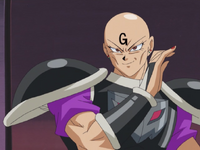 (ハーゲン), also known as Balder in the English manga[1]: The leader of the G-Block. He is a bald man wearing special armor, with a "G" marked on his forehead. He appears normal in the manga, but he is shown wearing makeup in the anime, giving him an effeminate nature.

Hagen is first seen anxiously awaiting Bo-bobo's arrival at G-Block. Originally, he was expecting his opponent to be a cunning warrior, but he is sorely mistaken. In the anime, he was waiting for the return of Pikari and his troop, and didn't even know who Bo-bobo was. Bo-bobo uses all sorts of weird and ineffective hajike moves that shock him, but do no damage. Hagen comes to think of his opponent as a pathetic fool and moves in for the kill, only to be struck down with one blow from Bo-bobo's armpit hair.

Hagen is also the final boss in the Toonami.com game, "Nosehairs of Fury". 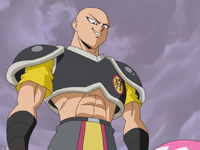 (ピカリ): The vice-leader of G-block, who tries to shave Beauty's head in Inafu Village. 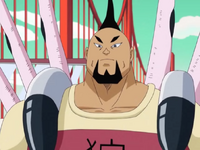 (ゴルゴン): A hair-hunt trooper from one hundred years ago, has the ability to breathe fire (and for some reason he can fight better underwater). He is finally beaten by a surprise punch from Don Patch.

According to Tokoro Tennosuke in Bobobo-bo Bo-bobon, Gorgon was once a disciple of a psychic. However, because he wasn't able to purchase a spoon for 10 yen, he was excommunicated.[2] 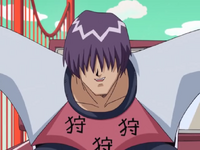 (ニヒル, Nihiru)/Ringo (assumed name): A hair-hunt trooper from one hundred years ago, known for having bangs in front of his eyes and being extremely cool. He is first seen with several other Hair Hunters searching for the last survivor of The Hair Kingdom. He and his party find Bo-bobo and the others and challenge them to a 5-on-5 fight. Though their power beats that of the current Maruhage Empire troops, the rebels prove to be far stronger, and soon only Nihiru and Shaina are left. The two are left to experience the full brunt of the rebels' hajike abilities, and they soon fall in battle. Nihiru is left with only enough energy left to retreat and go find help.

Nihiru soon returns, with the assistance of his boss and former G-Block leader, Rose-Lily Kikunojo. Once they find Bo-bobo training in Eternal, Kikunojo uses attacks that could harm Nihiru as well (he openly stated that Nihiru is no longer of use to him, and is now worthless in his eyes), causing Nihiru to flee the fight and watch from the sidelines. He continues to watch from a nearby alley, and to his surprise, Bo-bobo defeats Kikunojo.

Nihiru's powers seem quite similar to those of the "Dragon Ball" series. These powers consist of aura based projectiles and the ability to fly. 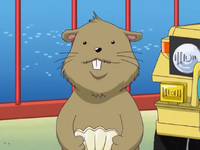 (ラッコ, Rokko): A small otter who is a Hair Hunter from one hundred years ago. During the battle between the rebels and the first five Third Era Hair Hunters, Dengakuman saves him from drowning, stating that they are alike. Near the end of battle, Rocco ends up being sent off to an aquarium. He claims that he was not really part of the Hair Hunters and was merely hitching a ride with them. 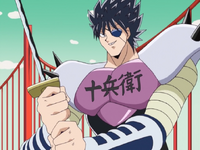 (十兵衛, Juubei): A hair hunter from one hundred years ago who wears an eye patch and wields a sword. He challenged Softon to a fight, but was beaten after one attack. 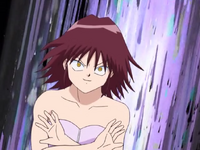 (シャイナ, Shaina): A female Hair Hunter from one hundred years ago. She can transform her hair into a spider and shoots strings from her fingers and manipulate them like spiderweb.

Locations
Retrieved from "https://bobobo.fandom.com/wiki/G-Block?oldid=20717"
Community content is available under CC-BY-SA unless otherwise noted.