H-Block (Hブロック, H Burokku), also known as H-Block Base (Hブロック基地, H Burokku Kichi), is a location and a group from the manga and anime series, Bobobo-bo Bo-bobo. The individual members of H-Block are also the "Wig Gang".

One of the Maruhage Empire's local divisions. Its members consist of bald men, who cover up their domes with wigs. Since their appearance in the area, they've made a powerful enemy in the form of the Hajikegumi. 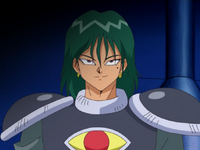 (マイテル, Maiteru): The leader of H-Block. He claims to be a descendant of Medusa (her third cousin in the dub), and has an ability to turn people to stone like the famed Gorgon. He turns Don Patch to stone, but his ability doesn't work on Bo-bobo; instead it turns Bo-bobo into various vegetables. During the fight with the rebels, Maitel is reminded that he has a date with his girlfriend Kaori (Cathy in the dub); what's worse is that he's supposed to bring three friends with him for her friends. Maitel ends up taking Bo-bobo, the Game Boy Pig and Don Patch with him to his date, but after the three ruin his date, Kaori and her friends storm out, rejecting him. Shortly afterward, Bo-bobo strikes him down with Hanage Shinken. 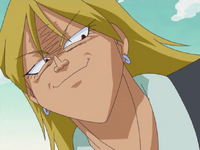 (タラシ, Tarashi): The vice-leader of H-Block. He abducts Beauty while Bo-bobo and Don Patch first fight each other, prompting the two to go after him. Unfortunately, he doesn't stop at H-Block, and instead takes Beauty into the woods. He usually likes to kidnap girls on his own and shave off their hair (as well as sell them to wig makers at black markets in the English dub), and was going to do the same to Beauty, only to be stopped by Heppokomaru. 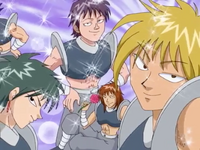 (カツラ組, Katsura-gumi)/Wig Bros: The foot soldiers of H-Block. They are all bald men who wear wigs. They also receive a lot of fan mail. Shorty upon reaching H-Block, Bo-bobo and Don Patch take them out all.

Locations
Retrieved from "https://bobobo.fandom.com/wiki/H-Block?oldid=19657"
Community content is available under CC-BY-SA unless otherwise noted.