The Hair Hunters (毛狩り隊, Kegari-tai) are a group of characters from the manga and anime series, Bobobo-bo Bo-bobo. They serve as the foot soldiers of the Maruhage Empire.

Hair Hunter troops make up the majority of the Maruhage Empire. True to their name, Hair Hunters are usually seen raiding towns and shaving off the inhabitants hair, all in the name of the emperor. If not involved with any head shaving, Hair Hunters can also be spotted as guards for bases.

Given the fact that they are just grunts, an individual Hair Hunters is the weakest force in the empire. In terms of power, a common Hair Hunter is more than a match for any helpless citizen, but cannot hope to hold a candle to someone like Bo-bobo. 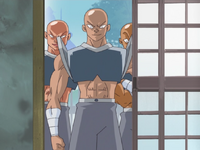 (毛狩り隊隊員, Kegari-tai Taiin): The Hair-Hunt troopers of the fourth era are usually bald, well-built men wearing special armor. While they are trained fighters, fourth era Hair-Hunt troopers are also given people skills. While the goal of the Maruhage Empire is world domination, they try to do so not just through raw power, but by other ploys, such as propaganda and sales. To that extent, these Hair-Hunt troopers can also be spotted as staff members for amusement parks and even tour guides for bases. 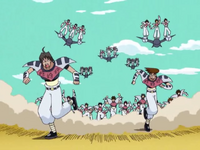 (旧毛狩り隊員, Kyū Kegari Taiin): Unlike their successors, the Hair-Hunt troopers of the third era are much more aggressive and powerful, and have attempted to take over the world through brute force. A lot of these Hair-Hunt troopers are allowed to keep their hair, as opposed to being bald.