Hajike Block (ハジケブロック), also known as Wiggin Block in the English dub, is a location and a group from the manga and anime series, Bobobo-bo Bo-bobo. 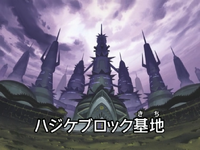 Hajike Block is a division in the Maruhage Empire that was formerly closed down by the leader of the Maruhage Empire. It is a legendary block of hajike warriors. Great hajikelists, both working for the empire or fighting against it, search for this block both to fight against other hajikelists as well as gain assistance from some of the warriors or items that can be found here. The leader of this block was Rocker, but he seems rather weak when compared to the other hajikelists of the block. Former assassin Rice lives here after Bo-bobo saves him and even Tennosuke lived here for a short time before joining Bo-bobo's team.

In Bobobo-bo Bo-bobo Seriously!!? True Fist Match, the Hajike Block returns as one of the attractions in Hallelujah Land under the name "Hajikelist House".

(ロッカー, Rokka): The leader of Hajike Block, Rocker is already captured by Rice's "Kome Shinken" by the time the rebels encounter him. After an hour of sitting in a giant rice bowl, he ends up turning into a panda, and is never seen in the series again.

Despite really being turned into a panda, it is revealed that after an hour in the rice is up, one is supposed to put on a panda costume, not really turn into a panda. 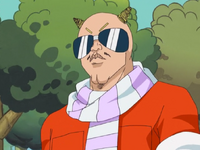 (広, Hiroshi)/ Harry Hatenko: An odd man with huge sunglasses, Hatenko's clothes, and yellow horn-like hair. Hiroshi is first seen among that flock of Hatenko's "friends", shortly after Hatenko takes off to join them in their migration. Shocked by his sudden appearance, Heppokomaru immediately notices his different he is from the rest of the group. While speculating if he's an evolved Hatenko, he answers his cell phone by his actual name, confirming that he isn't a Hatenko at all.

After Don Patch shoots him out of the sky with a pop gun, Hiroshi climbs out of bush he fell in and reveals that he was wearing a helmet identical to the top of his head. When Don Patch demands to know who he is, he starts carrying on in a baby-like voice that he wants ice cream. Bo-bobo then pulls out an ice cream cone, and Don Patch starts acting the same way. However Bo-bobo eats the ice cream cone, and Hiroshi and Don Patch both strum a guitar in shock.

The act continues when Bo-bobo pulls out another ice cream cone, much to their delight. Pretending that Bo-bobo is his teacher, Hiroshi promises that won't play hooky anymore, while Don Patch promises not to be late or absent. Bo-bobo rewards the ice cream to Don Patch, knocking Hiroshi out. While Hiroshi is unconcious, Bo-bobo discovers a "ha" (ハ) badge underneath his scarf, identifying him as a member of Hajike Block. 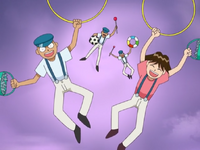 After the rebels fail to enter Hajike Block's front gate while hajike-ing in dolphin costumes, the keepers gleefully descend from the sky, giving them a friendly greeting, but quickly attack them with a double knee drop. As the rebels try escape with assistance from N&Ns, they glare at them.

After N&Ns escape attempt ultimately fails, the keepers manage to capture Bo-bobo and don Patch anyway and drag them to the Dolphin Show. The show goes on as planned as they force Bo-bobo and Don Patch to perform tricks. However, Bo-bobo and Don Patch reverse the roles and make them perform tricks, rewarding them with dumbbells instead of fish, which plunges them underwater. Despite being exhausted, the keepers have enough stamina to announce the final act, but are unconscious by the time its over. 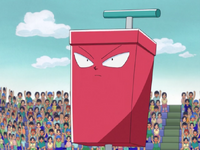 (ラインひくやつ, Line Hikuyatsu), also known as : A sentient striping machine (ライン引き) that the rebels encounter at a dolphin show at the front of the Hajike Block.

Immediately after Bo-bobo and Don Patch defeat the keepers, Line-Drawing Guy addresses them from the sidelines, stating that they can't call themselves dolphins. He then introduces himself as "the thing that draws lines on school fields". After the rebels ignore him and walk away, he asks them to at least listen to him. He tells them that he made a promise that he would go see the dolphins for his best friend: the 15th Level of the Vaulting Box, who was going to be thrown away for being most useless item in Toyohashi City Elementary's gym storage room. However, he mentions that he forgot his video camera.

After Beauty questions why he even came to the show, he mentions that came "to swim". Bo-bobo then kicks him into the water, as the rebels walk away, while Line-Drawing Guy struggles not to drown. According to the narrator, Line-Drawing Guy would eventually go on to represent Japan in swimming, and play a major part in the world championships.

As the rebels are confronted by the many hajikelists of Hajike Block, Beauty backs away in fear, only to be greeted by the Hajike Fortuneteller standing right on top of her, who wants to read her fortune. After Beauty freaks out and runs away from him, he approaches her closer and closer. Backed into a dead end, Beauty begs him not to read her fortune, but the fortuneteller process to do so, as he flips through a large fortune book. However, he realizes that he can't read so many kanji, and rips the book in half. As he eats the book in frustration, a goat on a scooter shows up, who the fortuneteller greets and waves goodbye to. 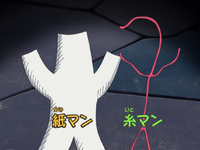 After watching Beauty's encounter with the Hajike Fortuneteller, Heppokomaru is greeted by Thread Man and Paper Man, who challenge him to a battle. However, they are quickly blown away by a passing wind. 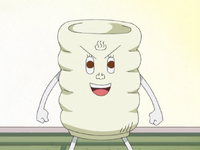 (ザ・湯飲み, Za・Yunomi): Guardian of the "Tea Ceremony" room on the first floor of Hajike Block. The Teacup ends up getting Beauty, Heppokomaru, and Don Patch involved in a bizarre tea ceremony.

In a scene cut from the dub, the Teacup shows a very S&D reaction towards another teacup being used for coffee.

He reappears during the New Emperor Playoffs to assist Bo-bobo's group against Halekulani, Haoh, Giga, Shibito, and Lambada.

He is also a minor enemy in Bobobo-bo Bo-bobo Seriously!!? True Fist Match. 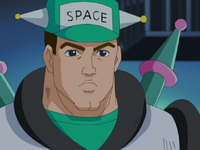 (キャプテン石田, Kyaputen Ishida): A space policeman who appears from a Hajike Bird that Heppokomaru uses in the "Hajike Pet Shop" on the second floor of Hajike Block (apparently he appears from any Hajike Bird when the holder does not hold very much Hajike ability). He is defeated by Bo-bobo after it is revealed he was crueling using Tokoro Tennosuke (whom he bought after he returned to the supermarket post-Gunkan) to invade Mars.

(チューの助, Chūnosuke): A small mouse samurai encountered on the third floor of Hajike Block, Bo-bobo's team must partake in a cat-and-mouse game in order to stop it. His blade is called, Shadow Fang ("Shadow of the Fang" in the English dub).

He briefly works together with Bo-bobo during the New Emperor Playoffs.

Other Members and Residents

(アッポロ, Apporo): A sentient spacecraft who briefly appears at Hajike Block, as a rival to N&Ns. Like N&Ns, he too has his own makeshift "spaceship", which is a small red kart, with a mattress attached to it.

After N&Ns offers to help the rebels escape a second time, Apollo arrives shortly in front of him, offering the rebels a ride on a better spaceship. Despite N&Ns attempts to keep the rebels from Apollo, they decide to go with him anyway. Unlike N&Ns, Apollo manages to get them to a further portion of Hajike Block.

(アイボ): A creature made of wooden planks seen in the Hajike Pet Corner. The staff of Pet Corner has identified it as an Aibo, a very popular series of robotic pets that were created by Sony in the late 90s and early 2000s, but they say they are still unsure (despite Heppokomaru noting how it looks nothing like a real Aibo).

(不快になるダルマ, Fukai ni Naru Daruma): A Daruma (a Japanese doll know for bringing good luck and encouragement) wearing a monocle and smoking a cigar that the Pet Corner has labeled “offensive”. Beauty doesn’t think so at first, but when a small angel comes out of the top of its head like a cuckoo clock and starts chanting "breakfast time”, she agrees.

This was replaced with the unpleasant lucky cats in the anime.

(雌ブタ, Mesu buta): A group of female pigs in a dressing room. Tokoro Tennosuke accidentally walks in on them, and is promptly scolded for it. 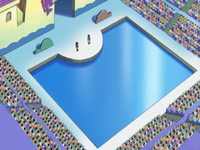 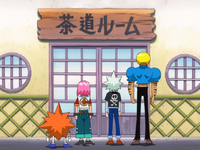 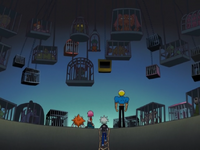 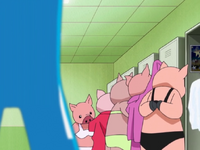 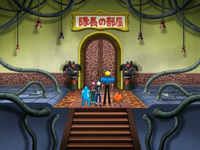 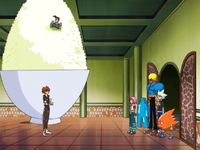 Locations
Retrieved from "https://bobobo.fandom.com/wiki/Hajike_Block?oldid=20570"
Community content is available under CC-BY-SA unless otherwise noted.