The Hajike Gang (ハジケ組, Hajikegumi) also known as the Wiggin Gang in the English dub, are a group in the manga and anime series, Bobobo-bo Bo-bobo (series).

The Hajike Gang is a small, Hajike-dedicated gang led by the infamous hajikelist, Don Patch. Under normal circumstances, the gang spends its time driving others crazy through the practice of Hajike, but ever since the appearance of the Maruhage Empire, they became one of the few groups to openly oppose the evil empire. In particular, they showed great outrage towards H-Block, also known as the "Wig Gang", who antagonized their usual base of Hajike Village. Despite their displeasure, there was little they could do against the base, until they met Bobobo-bo Bo-bobo.

The leader of the Hajikegumi, Don Patch left the gang to fight the Maruhage Empire (in reality, he wanted to escape from them as he saw them as annoying), and has left the gang in Zakokyara's care. 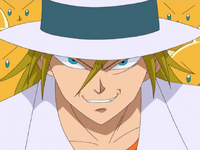 (ハジケ組若頭, Hajikegumi Wakagashira): The second-in-command of the Hajike Gang. Like all of the other members, the lieutenant idolizes Don Patch completely, and loves to see his boss in hajike battles. Since Don Patch's leave, the lieutenant has been watching over the Hajike Gang. In the manga and anime, he is simply referred to as "lieutenant", while Bobobo-bo Bo-bobon lists him as a mook character (ザコキャラ, Zakokyara). 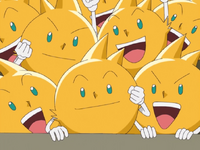 (コパッチ, Kopatchi)/Baby Patch: A group of numerous, small orange creatures that look similar to Don Patch himself. They stand at least a foot shorter than Don Patch, and instead of spikes, sport a small tuft of orange hair on top of their heads. Given their childish voices and natures, it can be assumed that they are the child stage of whatever Don Patch is, and it is possible that he might have once been a Kopatch.

The Kopatch are, needless to say, the majority of the gang, and the exact number of Kopatch within the Hajike Gang remains unknown. Like the lieutenant, all they really want to see is their boss Wig Out, and have nothing but the utmost respect for Don Patch (even though he really finds them annoying).

The Kopatch seem naturally drawn to their leader whenever he ascends to Ikarin Patch. Whenever this happens, they will rush to the Don's side and try to make him as angry as possible (the angrier Ikarin Patch is, the stronger).

The only other human member besides the lieutenant. Being the most recent member, he has the lowest stature among the gang, even below that of all the Kopatch.

Originally a member of the Reverse Maruhage Empire Four Heavenly Kings and enemy of the rebels. Halon Oni had a small revelation after being defeated by Ikarin Patch, and prayed that one day he could be just like him. His wish was instantly granted, and he was turned into a blue Kopatch. He now resides within the Hajike Gang.