Halekulani (ハレクラニ, Harekurani) is a character from the manga and anime series, Bobobo-bo Bo-bobo. He is the fourth and the strongest of the Maruhage Four Heavenly Kings. He is also the owner of the amusement park: Hallelujah Land, as well as the main antagonist of the Hallelujah Land arc.

Halekulani is a man with frazzled green hair, blue eyes, and very thick eyebrows. He normally has a calm, almost bored-like expression on his face, and can almost never be seen without his golden armor.

Halekulani's personality is more realistic then the rest of the Heavenly Kings; not making a big deal of the intruders and giving the impression of a bored wealthy person. He even begins to doze off as Bo-bobo and his allies struggle to reach him to fight. He has been shown to be cruel as he told a soldier to make the slaves work harder until they made a millions worth of money. He is obsessed with money, even to the point he can go insane over it, saying money repeatedly in a crazed stance. In his first physical appearance, he was seen bathing in money.

Not much known about Halekulani's historical background, not even how or why he joined the Maruhage Empire. Though Halekulani was one of the few villains who actually got a flashback, it was only one panel in length and nothing was shown, other than he was forced to make a difficult decision 20 years ago. It was revealed in one of the Bo-bobo volumes that as a child, Halekulani was poor, to the point where he had to steal bread in order to survive[3]. It was during this time that his obsession with gaining money created the "Gorgeous Shinken" that he is well known for.

During his time serving the Maruhage Empire, Halekulani oversaw the production of Hallelujah Land. Despite owning the world's best theme park and owning a vast fortune, Halekulani used incredibly cruel methods to control the park. Secretly, Halekulani used slaves to run the park, and if any rides began to decrease in ratings, Halekulani cut his losses and blew up the ride, regardless if there were any people inside.

For the further obedience and collection of his ultimate desire in his park, Halekulani controlled a platoon of minions who enforced the law in the park, clamping down on trouble-makers and making sure his profits continued to come in. These assassins were placed all over the park, even to the point of the trains that transport potential customers inside. The most powerful of these warriors is a group known as the Hell Killers, a group of five who took out the particularly pesky nuisances causing a disturbance in Hallelujah Land, beating them up and then showing them the door, if they're weren't dead first. Although most troubles are handled with little problem, the arrival of Bo-bobo's team gave the money master and his squadron of minions their work cut out for them.

After Bo-bobo and the rebels took out all of the Hell Killers, Halekulani is left to deal with the rebels himself. Upon their arrival Halekulani deals many blows to the team, and turns Suzu into a coin, all of which he did while sitting on his chair! This continues until Bo-bobo drops a gondola on his head, forcing the dictator to actually get off of his chair. While he does hit Bo-bobo numerous times, the nose hair warrior counters every attack thrown at him, until Halekulani activates one of his most vicious attacks: Death Money Board Game! Here, the will wander around the board after rolling the dice, and for almost every space they land on, Halekulani steals money from their souls, causing their bodies to turn into diamonds! Bo-bobo finally lands a hit on Halekulani by unleashing Yugi Mutou from his head and burning the money master with Slipher! Afterwards, Bo-bobo takes over his board game and turns into an odd board game. Here Halekulani is forced to have Don Patch cling to his shoulder, he's attacked by fish, bulldozers, and meteors, and gets direct service from none other than Serviceman! When it's finally over, Halekulani endures many odd attacks, until finally losing conciousness!

Rather than losing consciousness like everyone thought, the stress gets to Halekulani, and he goes insane, but at the same time gains a tremendous power-up! Halekulani tries to crush Bo-bobo with sheer force and even every dollar in his fortune, but Bo-bobo counters it all, and finally comes to the conclusion that Halekulani has no idea what is really important in life. Bo-bobo attempts to educate him by showing him seven days of a "normal person's" life, but none of it is even remotely normal! Throughout the seven days, Bo-bobo is involved in a hostage situation and creates a lousy script, a squirrel eats chocolate pies, and the hajikelist trio visits wonderland in disguise, all while Halekulani is unmercifully thrashed around! Finally, while attempting to tell him the real meaning of life, Bo-bobo pile drives Halekulani into the ground, and reveals that the most important thing is... money (in reality, Bo-bobo did not want to give Halekulani the satisfaction of knowing the true answer)! Halekulani is now truly unconscious, and the rebels leave the theme park.

It is unknown what happened to Halekulani after his defeat. Halekulani apparently returned to his career as head of the Hallelujah Land Amusement Park, despite the fact that it is no longer under the control of the empire. He does not appear again until the New Emperor Playoffs begins. Like most of the Maruhage Empire members, Halekulani enters to try and become the new emperor. Despite technically being a members of the Maruhage Empire, he saves Beauty from Higusari Seijūrō, but then tells her that he will find and get revenge on Bo-bobo.

He is one of the finalists in the competition, but they are all attacked by Crimson and LOVE of the Reverse Maruhage Empire. The duo attempt to sacrifice the powerful finalists in order to raise a powerful vessel called the Yamiking. Halekulani is one of the four survivors alongside Gunkan, Hatenko, and OVER. Bo-bobo's team arrives just in time to save them from being sacrificed. Angry at the Reverse Empire for trying to use him, Halekulani decides to join Bo-bobo's group in order to defeat the common enemy.

Upon boarding the Yamiking, Crimson is the first enemy that the rebels encounter. Halekulani challenges him alongside Bo-bobo, and Tennosuke. But during the fight, Halekulani gets thrashed around not only by Crimson himself, but by Bo-bobo and Tennosuke as well. Eventually, it causes him to go even crazier than usual. His hair spikes up, his pupils disappear, and a weird symbol appears on his forehead. He then breaks down his armor into paper money and throws it everywhere, striking his opponents and his allies at the same time (surprisingly Bo-bobo turns this to his advantage, and creates Kintenbo in the process)! After Crimson is defeated, he regains his sanity and continues onward with the others, though he does not fight anymore. He does display some unseen compassion for others, as he later protects Beauty and Heppokomaru from one of Byakkyo's attacks. After the empire falls, Halekulani flies back to Hallelujah Land, never to be seen again in the series.

Halekulani plays absolutly no roll in Shinsetsu Bobobo-bo Bo-bobo, but he appears in the last chapter. He is seen attending Tokoro Tennosuke's Hair Hunter reunion with many other familiar faces.

I Will Crush This Tournament!! (この大会を潰してやるぞ…っ!!):

His main attack style is the "Gorgeous Shinken" (ゴージャス真拳; Fist of Gorgeousness in the dub). This involves the control and manipulation of all monetary items, from coins to paper money to precious jewels. He can even summon the person on a yen coin to attack his enemies. One of the most devastating of these attacks include wrapping his opponent with paper bills to transform them into what they are worth (usually, only one yen). He can also send opponents into a world based on the board game Sugoroku (in this case, the board game continues indefinitely until the opponent is dead) and power up his Gorgeous Shinken abilities by fusing with the many precious gems he can collect all over his armor. One of his transformations give him larger armor, he is encrusted in jewels all over his body, he has no pupils, and is incredibly powerful.

His obsession over money seems to give him a great amount of power. Every time he enters the "No-Money Mode", where he goes temporarily crazy, his armor becomes larger and stronger, and his attacks become even more vicious than usual. His money also gives him the power of levitation in one of two ways; He can either sit on top of a large amount of money while it levitates, or his fortunes can swirl around him, allowing him to defy gravity. 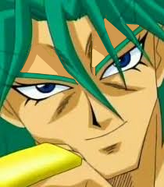 Halekulani thin eyebrows
Add a photo to this gallery