Hallelujah Land (ハレルヤランド, Hareruya Rando), also known as Heaven Square (天国広場, Tengoku Hiroba), and Holy Guacamole Land in the English dub, is a location and a group from the manga and anime series, Bobobo-bo Bo-bobo. It is a massive theme park, under the command of Halekulani of the Maruhage Four Heavenly Kings.

Hallelujah Land is one of the Maruhage Empire's most powerful bases, but similar to A-Block, it is also a massive theme park. However, Hallelujah Land is most popular and profitable them park in the empire, as well as the entire world. Connected through the empire's transportation network, Halekulani, the owner and boss of the park, allows for easy access and availability for all who wish to entertain themselves. But there's a cost for all who go there: every single attraction comes with a fee, forcing everyone to add to Halekulani's already tremendous wealth. And at the very moment the attraction no longer makes profits, the mad leader cuts his losses by blowing it up (even if people are still inside)! On another note, Hallelujah Land also uses harsh slave labor in order to construct new rides.

Later after Halekulani's defeat, Bo-bobo, Don Patch, and Tokoro Tennosuke decide to rebuild Hallelujah Land. Tennosuke proposes that they rename the park, "Tokoroten Land", while Don decides they should plant rubber gloves, both ideas of which are put into action. However, after 30 minutes, their park idea obviously flopped since no one showed up.

However, we do see later that Halekulani returns to his park and retains control even after his own defeat.[1] 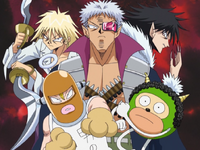 (ヘルキラーズ, Heru Kirāzu): Just like Gunkan and OVER before him, the Hell Killers are Halekulani's five strongest warriors, working within the confines of Hallelujah Land sent down to take out any intruders to the park, such as Bo-bobo. 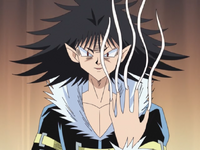 (鮮血のガルベル Senketsu no Garuberu)/Garbel of Manicura: A man wearing completely black clothing, Galubel is the first of the Hell Killers and the guardian of the "Candy House". He has the power to lengthen his nails and control their motion and their movements with ease. He meets Bo-bobo and Tokoro Tennosuke after they sense his "presence" in the Gingerbread House (In reality they just wanted to some sweets). He does major damage to Tennosuke right from the start of the fight, but his mistake comes from the fact that one his nails cut Beauty in the arm. An enraged Bo-bobo puts a stop to his vicious nails with the help of "Dog-Face", a manicurist named Yasuko, and finally defeating him using a team-up move with Tennosuke that finally knocks out Galubel. 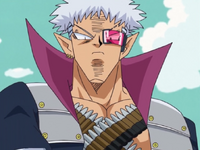 A cyborg who has a scouter built into his eye that reads power and ability, and wields two large guns. He is a member of the Halekulani's Hell Killers.

T-500 first attacks Don Patch after he takes over the Dasaiger stage show at Hallelujah Land. His only mistake when confronting the demented creature is saying that he is "part of" the Bo-bobo group, a fact that enrages Don Patch to the point where he claims to be the main character of the series instead of Bo-bobo.

He then proceeds to assault the cyborg mercilessly with a string of hajike attacks, confusing the cyborg and making his scouter useless. Don Patch then knocks him out with "Cheapskate Blues". Before passing out, T-500 believes that Don Patch is the main character and states then next time he will attack a lesser known hero. 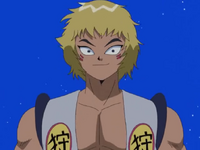 (カネマール): Kanemaru is a spear-wielding assassin who Bo-bobo and Tokoro Tennosuke encounter, during their train ride to Halellujah Land. Known as the "Number One Train Fighter"/ "Boxer on the Boxcar", he is able to stand on top of his moving battlefield without falling off. The same can not be said for the duo, as they continually slip off. After many attacks, Kanemaru accidentally impales Don Patch (who was sleeping in the car), allowing them to once again fight as a trio.

The fight with the trio seems to be in Kanemaru's favor, as the trio plow right through two tunnels, doing major damage to their scalps (Kanemaru was smart enough to avoid it by ducking), and are pelted by many tree branches. Kanemaru returns to the train right as it approaching Hallelujah Land, but Bo-bobo causes the train cars to separate. Kanemaru lands on one train car and steers it after the trio's car. After both cars completely decimate, the nearby "Space World" attraction, Bo-bobo decides that he has had enough, and defeats Kanemaru with his "Lightning Nose Hairball" attack (he electrifies Don Patch and uses him as a bomb). Kanemaru is not sore about losing, and gives Bo-bobo his title and the sash that goes along with it (at first, Bo-bobo is proud of it, but then throws it away after Beauty tells them that she's never heard of such a title).

After Nightmare's defeat, Kanemaru reports back to Halekulani that the rebels have broken into the theme park. Displeased, Halekulani turns him into a yen coin for his failure. 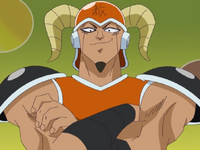 (ナイトメア, Naitomea): A man with orange armor, two spaced buck teeth, and two horns on the sides of his head. As the guardian of the "Small Child Area" of Hallelujah Land, he fights by taking advantage of being the only adult within his area. This comes in handy, as Bo-bobo and his group have been turned into little kids thanks to the arenas power; this also cancels out their Shinken abilities.

Despite this, Bo-bobo fights back anyways, and ambushes the villain with a shark in a sandbox and a bottomless pit. Afterwards, Nightmare is lured into a pipe maze, where Bo-bobo attacks him with a flame thrower, Don Patch attacks him with two pistols, and is blown up by a grenade. Despite all of this, Nightmare survives, and unleashes his most powerful ability, "Death Nightmare", which make his victims' worst nightmares come to life. However, Tennosuke's nightmare is being tortured by tofu, Don Patch's nightmare is being surrounded by seven beautiful women wearing bunny suits, and Bo-Bobo's nightmare is playing basketball with kangaroos.

Finally, Bo-bobo decides that a fusion is needed to defeat the boss, and he and Don Patch try to become BoboPatch. However, due to the fact that they are small children, BoboPatch comes out poorly drawn. Nightmare makes the fatal mistake of underestimating his new foe, and BoboPatch winds up defeating him with only one attack.

(宇宙人, Uchūbito): A group of small aliens, who reside in the Space World attraction. The aliens are first seen minding their own business, until Bo-bobo, Don Patch, and Tennosuke decide to plow through the attraction, while latched on top of one of the train cars they were riding in.

As they drive through the attraction, the aliens desperately try to avoid being run over. Two aliens are seen pressed against the train window begging for help, as Beauty wakes up, which freaks her out, thinking they're on another planet. To add to the confusion, Kanemaru plows into the attraction, riding on top of another train car, and starts chasing them.

With both train cars chasing them, the aliens try to get to their UFO for safety, but both cars crash into it, blowing up the entire attraction. After the explosion, the aliens take their anger out on Bo-bobo for leaving them stranded on Earth. Bo-bobo yells at them and slaps them with his nosehairs.

In the climax of his battle with Kanemaru, Bo-bobo charges Don Patch with static electricity and uses "Lightning Nosehair Ball" against him, hitting the aliens as well. 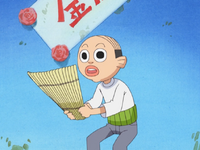 (金魚おじさん, Kingyo Ojisan): A man whose head is reminiscent to a goldfish. He is in charge of the "Uncle Goldfish Show", which consists of him (unsuccessfully) trying to do tricks with a glass blind. Needless to say, his show had little reception from guests, so Halekulani had the attraction blown up. Somehow, Goldfish man survived, without any wounds, and continued to perform. 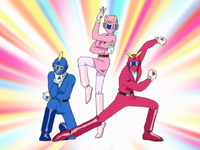 (ダサイジャー, Dasaijā): A stage-show superhero team, who are obviously based off of the Power Rangers. The team consists of three members: Dasaiger Red, Dasaiger Pink, and Dasaiger Blue. They first appear on stage, introducing themselves, but are suddenly confronted by their enemy: Evil Hands. As part of the show, Evil Hands "kidnaps" a volunteer from the audience (Don Patch), while the Dasaiger demand he fights them on even terms. After Don Patch self-destruct, both the Dasaiger and Evil Hands check to see if he's okay, only for him too suddenly hijack the show with his "Moo-Moo Milk Sales Event" act. Dancing cows then appear on stage and attack the Dasaiger. 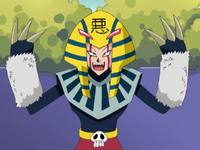 (悪の手先, Aku no Tesaki ), also known as Dasaiger's Enemy: An enemy of the Dasaiger. He is a villain in the stage show attraction of the same name. As apart of the attraction, he is supposed to pick a child from the audience to take "hostage", but he winds up picking Don Patch, who shortly takes over the show. 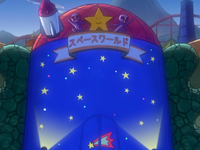 (スペースワールド, Supēsu Wārudo), also known as Spacey World in the English dub: The attraction consists of several small aliens and their spaceship. However, the attraction is also on the path of the train line heading into Hallelujah Land and nearly gets destroyed during Bo-bobo's team fight against Kanemaru. 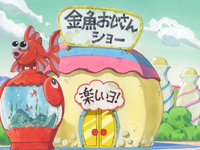 (金魚おじさんショー, Kingyo Ojisan Shō), also known as the Old Goldfish Man Show in the English manga: A short lived attraction. It is a show involving a man with a head in the shape of a goldfish. He is holding a Nanking bamboo screen for no apparent reason. It was destroyed soon after Bo-bobo entered it, due to lack of ratings. Though the building was destroyed, Goldfish-man survived without a scratch and continued to preform. Dengakuman continued to watch the show claiming it was "just like broadway." 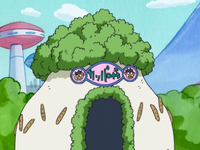 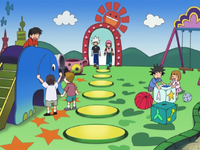 (ちびっ子エリア, Chibi-kko Eria)/Be-a-Kid World: An area in which one literally becomes a kid again, transforming into a smaller version of themself. According to Suzu, this is one of the most popular attractions in the park. It is guarded by Nightmare. 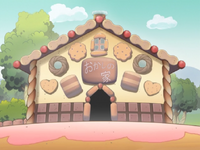 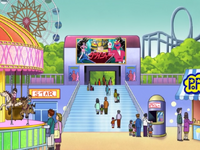 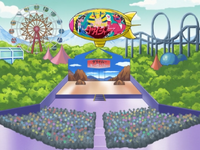 (ヒーローショーオシャレ戦隊ダサイジャー, Hīrōshō Oshare Sentai Dasaijā)/Muscle Marshalls: A live-action show starring a Power Rangers-esque superhero team called "Dasaiger". This is where Don Patch drags Heppokomaru after knocking him out. In the midst of the production, he hijacks the show and starts a musical number called, "Moo-Moo Milk Sales Event". This leads to an epic battle with T-500, where Don Patch comes out on top. 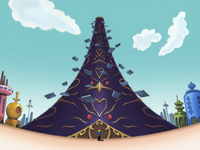 (クライムハイタワー Kuraimu Hai Tawā): A large tower near the center of the theme park. It consists of several panels to climb the tower, but each panel contains a different trap. This is the battlefield for the fight between the Hajike Trio and the Three Prison-Murderer Brothers battle, and Bo-bobo unleashes Bo-bobo Roulette to defeat them. 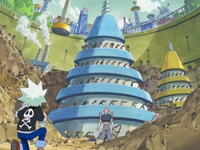 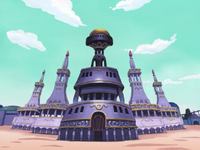 (マネーキャッスル Manē Kyasseru): Halekulani's domain where he keeps a giant money pool, and oversees the progress of his theme park. This is where the battle with Halekulani, and downfall of the theme park takes place.

Locations
Retrieved from "https://bobobo.fandom.com/wiki/Hallelujah_Land?oldid=21673"
Community content is available under CC-BY-SA unless otherwise noted.