Though appearing on the outside as an ordinary high school, this academy is in actuality the secret laboratory headquarters of Neo Maruhage Daioh: Babuu, who is using it to conduct and perform experiments to assist his superiors. Babuu and the B3 are the main protectors of the school, with Heppokomaru also based here due to being blackmailed by the Three Daioh as part of his employment with the empire. 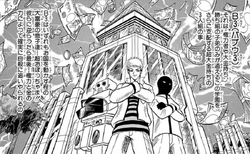 Also known as the Babuu 3 (バブウ3): Three of the richest and most powerful male students at Holy Spaghetti Academy, these boys work for Babuu and use their influence to control the school. The name is a parody of the "F4" boys from Hana Yori Dango. 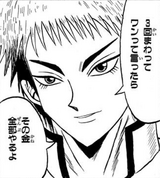 (統堂院様, Tōdōin-sama): The initial spokesperson of the trio, he uses his money and popularity (particularly with females) to try and take Bo-bobo down, claiming he's on the "winning team". However, Bo-bobo defeats him by taking care of his squadron with an army of chicks, then using a politician to embarrass him. 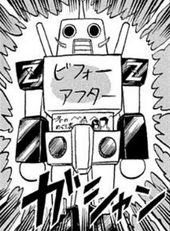 (シュバルツ・ベッケンバウアー, Shubarutsu・Bekkenbauā): A robot who tries to make friends by showing off his complete DVD collection of the drama Winter Chance-Meeting. But when Bo-bobo and Don Patch discover that the drama is about nuts and bolts, they destroy the DVDs and smash the robot with ramen.