J (ジェイ, Jei) is a character from the manga and anime series Bobobo-bo Bo-bobo. He is one of the Six Electric Brain Warriors of Cyber City.

J, also known as the "Messenger of the Black Sun", is a suited, mustached man with a head shaped like an onion (but no one knows if it's an onion or if it's garlic). He controls the power within Cyber City. He is the last and the greatest of the 6 Electric Brain Warriors.

Out of all the many senseless antagonists in Cyber City, J seems to be the most serious and he can be rather cruel in battle. However, he is not full of himself, nor oblivious to another potential. J's major concern in life is the well being of his job.

J meets Bo-bobo and the others when they have defeated four of the other Electric Brain Warriors. He is immediately challenged by Bo-bobo but Softon intervenes telling Bo-bobo to save his strength. Soften gets into his battle stance and J asks what it means. Softon replies that it means love. J realises that the love is channeled into opponents to render them useless. In a mini van for traveling around the world searching for love, Bo-bobo's crew drive towards J to attack him,but were easily taken down after a few attacks. Softon also attacked J but was beaten in one hit. Afterwards, J is immediately challenged by Bo-bobo, Don Patch, and Tokoro Tennosuke. Despite the trio's combined power, J finds the battle easy to the point where he actually toys with them. After much trying the trio finally manage to land a hit on him. Bo-bobo then decides that they won't be able to defeat J without the power of fusion. He is about to fuse with Don Patch, but J intervenes by switching Don Patch with Dengakuman. As a result, instead of the intended BoboPatch, the combination results in a new fusion form. This new fused form is Denbo. With the newly formed Denbo's powerful karaoke-style attack move being too much for J, he is weakened enough to be brought down with a final strike of Hanage Shinken.

After the battle, J is not overly bothered about his defeat; he is more concerned with the well being of Cyber City. J realises that with him defeated, there is no one managing the power of Cyber City and revelas that without proper management, the black sun will become a supernova and destroy the city. In a bout fo courage, Softon volunteers to stay behind and manage the Black Sun in J's place so that Bo-bobo cna go and face the boss of Cyber City - Giga. When Bo-bobo returns, he reveals that he has an idea to prevent both Softon and J from having to manage the Sun by using an even more powerful being in their place. The being he chooses is a pickled plum.

Although J and Softon are enemies at first, J eventually gains respect for Softon after witnessing how he managed to control Cyber City's power supply after J fell in battle. At some point, J confronted Softon and gave him a part of his Black Sun power, subsequently increasing Softon's Babylon Shinken.

J appears again during the new emperor playoffs, hoping to become the next ruler, but loses early on to Menma.

In Shinsetsu Bobobo-bo Bo-bobo, he is seen fighting off the invaders of Cyber City, but is immediately stricken down by Porusutoroi. J can be seen again at Tennosuke's Hair Hunter reunion. 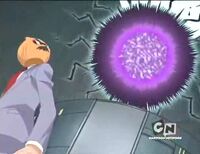 He is a master of "Kurotaiyō Shinken" (黒太陽真拳 Fist of the Black Sun), allowing him to attack with powerful black suns and illusions created from five black suns created in his field. He also has the ability to teleport other things as needed. It is with this power that J maintains the power within Cyber City, but it is because of this that J can not leave the power room.