Jump Super Stars features characters from the Weekly Shonen Jump manga magazine in Japan. The game features gameplay similar to that of Super Smash Bros. The game supports 2-4 players in multiplayer and features over 75 missions.

Koma (panel) is the term for the characters that the player can use in the game. Each koma uses from 1 to 7 squares of the koma deck at the bottom screen of the Nintendo DS. The deck has 20 squares (4 x 5) for the player to place his koma.

There are three types of koma: help koma, support koma and battle koma.

The player can build and store up to ten koma decks, and each deck must have at least one help koma, one support koma and one battle koma to be valid for use in battle. There are also a set of predefined decks that the player can use, but the player cannot change or delete those. It is also possible to exchange decks between friends, but they won't be able to edit the decks.[1]

Ally boosting is done by placing koma next to each other in the deck maker. If the koma placed next to each other are "compatible", their attributes will go up. Battle characters can get a longer health bar, or increase the maximum number of special attack gauges.

Jump Ultimate Stars has been changed slightly from the gameplay of Jump Super Stars. Jump Ultimate Stars gives battle characters the ability to dash and to do a new attack while guarding, which, instead of breaking the guard of the opponent, forces them to change characters, and can be identified by a green glow coming out of the characters which executes it. Also, certain 7 and 8 panel koma (along with certain 5 and 6 panel koma) obtain a visual difference during battle as opposed to the appearance of the 1-6 koma of the very same character, some of this variations also bring a totally different set of attacks to the character (eg. Naruto becomes Kyubii Naruto for his level 7 & 8 koma).

Battle characters now have a new ability known as Ultimate Actions (UA). These UA are different for each character, as some recover health, other recover sp, while others can be used to dodge enemy attacks. Another new feature added is the Evolution Chart. This area allows players to upgrade their characters by spending gems(currency earned for ko'ing opponents) to buy a new koma. Each character has a chart, starting from the 1 block help koma and branching off into the 2 and 3 block Support and the 4 to 8 block Battle koma.

Some characters have alternate block paths which unlock a different type for that character (eg. Goku as a laughter type instead of a power type), while others can be used to unlock koma for characters from the same series, quizzes for the series, and new worlds in the story mode.[2]

Aside from Bobobo-bo Bo-bobo, there are other series that are represented in Jump Superstars and Jump Ultimate Stars. Most of the main characters from each series appear as characters within the game. These series are:

Low-budget video game company Tommo, Inc. had exclusive distribution rights to sell Jump Super Stars (and Jump Ultimate Stars) in North America through retailers such as Best Buy and Fry's Electronics. Many small business also received minimal stock of these games. It is possible that since the Jump series could not be localized in North America due to them being a licensing nightmare, Tommo, Inc. took it upon themselves to sell the games to major retailers with a sticker stating that Japanese is the native language. It is possible that Tommo did this through gray marketing. 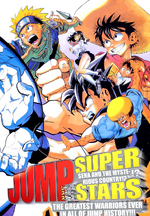 The manga can be read here.