Kilalino and his "duck underwear", Takashi, are two characters from the manga and anime series, Bobobo-bo Bo-bobo.

Kilalino (キラリーノ, Kirarino) is a Hair Hunt assassin who is a member of the Assassination Squad. He best known for wearing "duck underwear" Takashi, who serves as his partner, though Kilalino originally thought that Takashi was an inanimate object.

Kilalino is first seen in a small forest waiting for Bo-bobo to come by, so that he can assassinate him. Instead, Beauty comes by and sees Takashi's head sticking out. Mistaking him for a real duck, she goes over to get a good look at him, but when she sees Kilalino (and the position he is squatting in), she screams and calls him a pervert. Knowing that she is Bo-bobo' traveling companion, Kilalino takes her hostage, and threatens to kill her if she does not tell him where Bo-bobo is. Bo-bobo comes to her rescue (while dressed as a school girl), and after a brief introduction on Kilalino's part, the two prepare to fight each other.[1] Beauty then tells Bo-bobo not to lose to a guy wearing such stupid underwear, causing Takashi to yell out in anger (this surprises everyone but Bo-bobo). 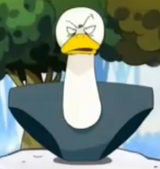 (タカシ)/Lucky: A pair of underwear with the head of a duck who Kilalino wears like a regular pair of underwear. While believing that he is a normal duck, he eventually learns that is a bad joke material. In the anime, he is worn on top of Kilalino's head, and learns that he's actually a swan ("dundie" in the English dub). He is 26 years old.

After Bo-bobo defeats Hagen and G-Block, Kilalino is sent to assassinate him.

Kilalino is first spotted by Beauty in Basabasa Forest, when she sees the head of a small duck sticking out from behind a tree. Beauty comes over to greet the small duck, only to discover that the duck is just an underwear accessory worn by hair hunter: Kilalino. When Kilalino asks if she likes ducks too, Beauty is immediately shocked and disgusted, calling him a pervert.

With Beauty now in his clutches, Kilalino tells her that he knows that she's traveling with Bo-bobo and demands that she tells him where he is our he will end her. Once Bo-bobo shows up (dress as a school girl), he throws a purse at him allowing her to escape. As bo-bobo changes back into his normal clothes, Kilalino speculates if Bo-bobo is the same person who took down G-Block (as well as H-Block in the anime). While Kilalino thinks he's an ordinary pervert as part of his plan, he confirms that he is a vegetarian, while Bo-bobo is seen eating many vegetables.

Kilalino then introduces himself as of member of the Assassination Corps, who was hired to assassinate him. Annoyed with Bo-bobo's antics involving his nose hairs decorated with flags, Kilalino prepares to fight him. After Bo-bobo remarks that he wouldn't lose to someone who wears underwear on his head, Kilalino gets angry and tells him that he wouldn't wear such a thing if it wasn't part of his division's uniform requirement. At that moment, Takashi, the duck part of Kilalino's underwear comes to life and yells out in anger over their remarks about him, much to everyone's shock.

Takashi, now sitting on a tree stump, spends the next few minutes scolding all three of them. He then asks Beauty to tell him what he is, but she tells him that she isn't sure. Takashi snaps at her and says that he's a duck. As he continues to berate them, he asks if they think he looks like anything else, only for someone to say that he actually isn't one. Takashi discovers that the voice came from his father, sitting inside Bo-bobo's afro. When Takashi demands to know how he's not a duck, his father decides to tell him the story of how he first met his mother (a pair of panties named Kaori), and conceived him.

After Takashi learned of his origin, his father sums up that he was born of the union between duck and panties. When Takashi questions if he's underwear, his father tells him that he's neither duck or underwear, but a bad joke material, devastating him. Takashi's father tells that it doesn't matter what he is, so long as he follows his own path. Moved and motivated by his father's words, he asks for Kilalino to put him back, which he agrees to. Accepting what he is, both Takashi and Kilalino get serious and prepare to fight Bo-bobo again. The duo charge towards Bo-bobo, only to be quickly dispatched by him.

The duo later appear at the Evil Blood Mansion, working as assassins. The duo have not improved much since they last saw Bo-bobo, and they fall for one Kilalino's own traps.[2] The two can be seen at the end of the Reverse Maruahage Empire Arc relaxing at the beach.

Kilalino appears as a mini-boss in Basabasa Forest, and act exactly as they do in the original manga. However, if you lose to them, the scene where Takashi suddenly gains sentience will play out.

In this game, Kilalino is the leader of two 3-man teams. The first team consists of him, Usa-chan and Puppetman. After their defeat, Kilalino returns to team up with Rice and Fundoshitarou moments later.