(魔攻破邪神ザルビオス, Makou haja-shin zarubiosu)/Lonesome Lomax: While Heppokomaru is fighting Katsu, Bo-bobo slices Don Patch in half. When both Don Patch halves come together, they fuse to become a destructive monster...who gets sliced and instantly defeated by Bo-bobo. In the anime, Don Patch fuses with 52 small pink versions of him.

According to Bo-bobo Gekijou, Zarbios is a lone hero who was resurrected in the ancient ruins of Trinidad and Tobago. Without anyone noticing, he fights villains such as politicians, monsters, and Echigoya, for the sake of the human race. After the segment Bo-bobo tries to slice hm in half, only for the slot machine in his eyes to come up "Route 16 Turbo", which results in him exploding and turning back into Do Patch. He actually becomes an effective super attack for Don Patch in Bobobo-bo Bo-bobo Great Explosive Hajike Battle.

(許して仮面, Yurushite Kamen)/I'm Sorry Masked Man: The form Bo-bobo and Don Patch become when they both fuse together (consequently, the four robots of Robo Team can do the same).

(玉手箱, Tamatebako): Also known as Treasure Chest / Patch in the Box in the English dub. In an anime recap of Episode 37, Bo-bobo and Don Patch (who are rewritten as old men instead of children) fuse to become a Japanese treasure box. When Nightmare assumes that smoke is inside the box that will transform him into old man, he tries to defeat them by opening the box while wearing a gas mask. However, a jack-in-the-box version of Don Patch springs out and sucker-punches him. 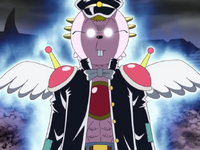 (ファイティング苦学生, Faitingu-ku gakusei)[1]: In an attempt to obtain Bo-bobo's Hair Ball for himself, Tsuru Tsurulina III sucks Bo-bobo into his mouth, while also taking in Don Patch (whom Bo-bobo was holding on to). This makes the former emperor transform into an extremely powerful, yet extremely strange-looking creature. Although Tsuru Tsurulina III is even more powerful with the Hair Ball within him, the affect of having the two Hajikelists alongside makes his transformation appear unworthy of his new power. However, Tsuru Tsurulina III does lose this form (and his Hair Ball-enhanced power) when Bo-bobo and Don Patch escape from his body.

Tsurulina III does actually become more powerful with the Hair Ball alone without absorbing actual people, but only gets a slight cosmetic change to himself merely doing so, as he does when he takes the Hair Ball of Bibibi-bi Bi-bibi.

During the fight against Nenchaku, Bo-bobo, Don Patch and Tokoro Tennosuke are forced to eat the tape from their opponent's "STOP Shinken", turning them all into goo. While in this state, they attempt to fuse several times, but due to their slimy state, the fusions created are very different from what would have been had they been in their regular forms. Initially the trio become one being, but instead of looking nothing like each other, this fusion has Tokoro Tennosuke's body, Bo-bobo's clothes and face, and Don Patches' spikes. This fusion attacks with the Legendary Fist of Chainsaw. Then they split apart into three separate beings with different parts of each of the trio. Ultimately the three of them combine their energy and their bodies to become the Grand Three Idiot Bazooka, which fires a massive laser against Nenchaku.

(田の助): Patchbobo fuses together Tokoro Tennosuke and Dengakuman with his "Material Hajike Fusion" during their fight with Byakkyō, creating a new being combined with the powers of the two edible characters (the body-build of Dengakuman, but the face, blocky shape, and Tokoroten-material body of Tennosuke)! After Patchbobo's fusion wears off, they turn back to normal. 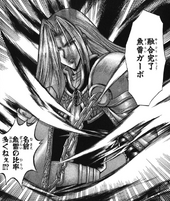 (魚雷ガーボ; Gyorai Gābo): During the battle against Bibibi-bi Bi-bibi, Bo-bobo and Torpedo Girl preform a last minute fusion together, which results in a powerful looking fusion. Despite the fusion's success, he is easily taken down by Bi-bibi's "Fist of Hair Hunt" before he can attempt anything.

Torpedo Girbo is one of Yoshio Sawai's more detailed characters. He has long blond hair, and a chain attached to his chest. He has two large shoulder guards and a cape flowing down from his shoulders. Throughout most of his appearance, he maintains a serious look on his face.

Because of his immediate destruction, Torpedo Girbo could not display any of his powers. Yet, amazingly, he appears alongside Landmine Dandy as one of Bo-bobo's attacks in the video game "Jump Ultimate Stars". In the game, his only ability is flying above his enemies in order to drop landmines on them.

Cite error: <ref> tags exist, but no <references/> tag was found
Retrieved from "https://bobobo.fandom.com/wiki/List_of_character_fusions_in_Bobobo-bo_Bo-bobo?oldid=20756"
Community content is available under CC-BY-SA unless otherwise noted.