This is a list of the main recurring and minor characters of the manga and anime series Bobobo-bo Bo-bobo. All names start with the original Japanese reading, followed by the title in the American versions (both manga and anime). 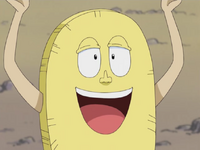 (つけもの, Tsukemono): Pickle is a yellow slice of pickled daikon (dill-pickle slice in the English dub) with arms and legs, who idolizes Bo-bobo. When first seen, he is one of the only survivors of Inafu Village besides Beauty, and like Beauty, wanted to join Bo-bobo. However, Pickle was not given that honor, as Bo-bobo "does not like pickles". The Narrator claims he was written off the show (which for the most part is true), but Pickle makes several short cameos through out the show. However, in the manga, he was supposedly eaten by a dog after the first chapter.

During the Hair Kingdom arc of the series, it turns out Pickle was left behind so he could spy on Bo-bobo's older brother, Bibibi-bi Bi-bibi. He did so by disguising himself as Bi-bibi's daughter, Vita. But while everyone was happy for his return, Don Patch ends up killing him because he doesn't even know what Pickle is. (Note: Pickle is one of the few characters introduced before Don Patch and thus one of the few he never knew)

In the final chapter of the series, Pickle returns thinking he would join in on Bo-bobo's new journey with new girl Yuki. ...But once again, he's denied joining.

Pickle makes a small cameo in Jump Ultimate Stars, by jumping out of Bo-bobo's afro if Bo-bobo wins the fight.

In Bobobo-bo Bo-bobo Escape! Hajike Royale, Pickle is found in a jail cell by Bo-bobo and Beauty. After Bo-bobo refuses to let him let, Pickle manages to break out by himself and follows them. After Don Patch is freed from his cell, Pickles leaves the group.

(ゲームボーイブタ)/ Piggie: The Game Boy Pig is yet another recurring character the manga/anime consistently throws in. Like the name suggests, it's a small pig that's consistently playing with a green "Gameboy" video game every time it shows up. The source of the joke comes from the first time Bo-bobo tries a fusion maneuver during his first fight with Don Patch, where it ends up having him playing against the pig due to the fusion's result. The Game Boy Pig shows up usually when we least expect it, either in a crowd or doing something connected with Bo-bobo's antics. In the anime he is named Pocket Game Pig.

The Game Boy Pig does little to nothing to actually assists Bo-bobo and his allies. The only real time it lent a hand was during the battle with Maitel.

During one special panel in the manga, it is revealed that the pig first found his Gameboy abandoned in a garbage pile. 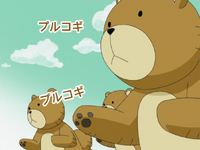 Bears who are first seen raiding the Hajike School and attempting to prevent Don Patch's graduation. They often appear doing the Purukogi dance. Two known members of the bears are Bear #12, who was once sick with a stuffy nose and couldn't perform the hajike dance well with the bears in ep. 4 and Bear #6, who was no longer with them, after trying to fuel them up with gasoline in ep. 27. They also help Bo-bobo fight some of the Hair Hunters from 100 yrs ago in Bo-bobo's "Angry Bear Wedding" attack. Two of the bears help Serviceman make his entrance in episode 61

(バビロン神, Babiron-shin)/Goddess Blabs-a-Lot: The god summoned by Softon whenever he uses "Babylon Shinken". The god appears to be a shiva-like statue with six arms that is constantly talking. While female in the English version of the anime, the deity is male in the original Japanese version. 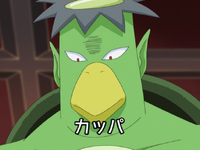 (カッパ, Kappa): Kappa is a mythical sea demon called a "kappa". He is a kindly creature that wishes no harm upon anyone personally. He assists Bo-bobo a few times throughout the series, but is considered a minor character.

While not a antagonist, this creature is another resident of Evil Blood Mansion who knows the benefits of wearing a stylish raincoat (a pun, since the word kappa in Japanese could either be the mythological water creature or "a raincoat" dependent on the context). He is a kind kappa who saved Don Patch from living umbrellas in the House of Blood Mansion.

He befriended Don Patch, but Bo-bobo kicked him off the team by the time they had reached Z-Block Base. He made short a appearance on a game show during the Z-Block Base saga but was kicked off the game show for being too excited.

He made very small appearances later on. During the Cyber City arc in the anime, he appeared as a cop when Shibito's attack backfired. He appeared in one panel at the end of the Reverse Maruhage Empire arc. During the The Hair Kingdom arc, several kappas (not necessarily Kappa himself) were fished out of Yuko's giant toilet in the center of the arena. They then forced Bo-bobo's enemies to study their homework long and hard, and whipped them repeatedly to motivate them more.

According to Yoshio Sawai, he was one character who considered joining Bo-bobo's team, but never did.

Kappa happens to be a boss in the Kappa Forest stage in Bobobo-bo Bo-bobo Seriously!!? True Fist Match. 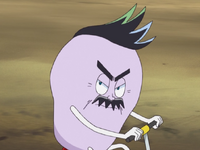 A bean-like grey creature with a mustache, who claims to be a space traveler. He first appears as a resident of Hajike Block, who tries to help the rebels escape from the Keepers.

After the rebels are attacked by the keepers, N&Ns suddenly appears and tells them to "return to" his "spaceship", which is just a small bike with a platform dolly attached to it. As they escape, he introduces himself as a space traveler and that there's no need to repay him since he rescued them on a whim.

However, N&Ns' escape attempt falls apart when he claims his ship's steering is broken, much to Beauty's pity. As he "struggles" to control his ship, his last resort to disconnect the ship's "main engine" in order to "spare their lives", which disconnects the platform dolly the rebels were riding on, while N&Ns just smacks into the base's front gate. While unconscious, he writes "wall" in the dirt in hiragana characters.

As a mob of hajikelist prepare to fight the rebels, during their return to the front gate, N&Ns returns to save the gang again. However a sentient spaceship named Apollo, and offers the rebels a ride on a better ride, much to their delight. N&Ns tries to convince the rebels not to go with Apollo, claiming that he's a space policeman here to sent them "back to Mars", and says that he will protect them. However, the rebels get on Apollo's spaceship anyway, while N&Ns does hand gestures in the form of his initials.

N&N also becomes an assistant for former enemies who come to his block, taking away Rice from Neo Hair-Hunt Land MAX after he falls to Lambada and even befriending Ochoboguchi-kun after Bo-bobo defeats him.

(関東野菜連合, Kantō Yasai Rengō): A group of biker vegetables. In the manga, they were the ones to first bring Bo-bobo (who was crucified on a cross) to Inafu Village. They later appear again in the first chapter of Shinsetsu torturing Bo-bobo by making him eat bell peppers. At the end of Shinsetsu Bo-bobo, they return to infrom Bo-bobo that their member, Pepper has betray them to build the Great Pepper Empire, an empire strong enough to surpass the Maruhage Empire.

(首輪, Kubiwa): Heppokomaru's collar that regulates the control of his Fist of the Backwind abilities. It has eyes, a nose, and a mouth.

When Heppokomaru enters his Baby Mode for the first time, he appears next Beauty. Both he and a dog explain his background, concerning his powers. After Heppokomaru defeats Katsu, Beauty is able to quickly snap Heppokomaru's Collar back on.

During Heppokomaru's battle with Fundoshitarou, the collar tries to help him win by unloosing himself to activate his Baby Mode. Unfortunately, he costs Heppokomaru the match by pulling in the wrong direction, tightening the collar and choking him. 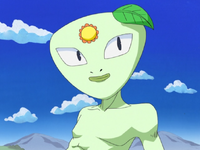 (フラワーマン, Furawaman): A green alien-like creature with a leaf hanging off of the left side of his head, and a sun-like badge on his forehead. He first met Gunkan sometime after his "first battle" with Bo-bobo.

In the aftermath of Gunkan's false account of how he first fought with Bo-bobo, his narrative shifts to how he met Flowerman (in place of Bo-bobo), who is first seen with him as they both lie on the grass, exhausted from a "earlier battle". After complementing each other's strength and introducing themselves, a friendship blooms between them and they go on to do many things together.

However, Gunkan wakes up one morning to find Flowerman mortally injured. Flowerman wakes up and tells him that he made a big mistake in being dragged into the Flower Wars (花大戦, Hana Taisen) without realizing it. He then gives Gunkan the badge from his forehead and requests that he plants it for me, right before his death.

Onaraman (オナラーマン; literally Fart Man): Onaraman is a man with a head made entirely out of flatulent gas. He runs a special dojo that trains people in the art of "Onara Shinken". This is where Heppokomaru goes to fully master his own shinken. Thanks to a years worth of training alongside Onaraman, Heppokomaru was able to upgrade his shinken into "Kakusei Onara Shinken".

Onaraman (true to his name) weilds the power of "Onara Shinken" (オナラ真拳; "True Fart Fist"), like Heppokomaru. However, his abilities with Onara are extremely powerful, as he can make a volcano erupt simply by breaking wind on the ground! Given his advanced abilities, it could also be possible that he has attained Kakusei Onara Shinken (覚醒オナラ真拳; Awakened Fist of Farts) as well.

(ユキ): A teenage girl who looks like an older, black haired version of Beauty introduced in the final chapter of the series. Bo-bobo ends up saving her from a fragment of Hair Hunters who remain even after the Maruhage Empire has fallen and she decides to follow him for her own protection. At the very end of the series, she joins Bo-bobo as he rides off to fight against a possible invasion of the Great Pepper Empire, who plan to attack the newly free empire.