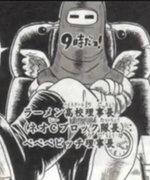 (ペペペビッチ理事長 Pepepebicchi Rijichō): Both known as the principal of Ramen High School and the original Neo C-Block Leader, he rules his school by making his students train to become Hair-men Hunters under the direct order of the Emperor. Working alongside Babuu, he helps develop more powerful Hair Hunters and leaders with the powers of the Zenmetsu-Gan pills. However, one of the first completed subjects turned out to be his replacement: True C-Block Leader Porusutoroi, who drained the chairman of body fluids with the power of his "Devil Shinken".

(タンス): Vice-leader of Neo C-Block. Shortly after Strawberry Pudding's defeat, Tansu rushes to his side, wondering who defeated D-Block. He then notices Gaoh, who he doesn't see as a threat, until Gaoh uses an assassination technique that instantly breaks his bones, defeating him.

Locations
Retrieved from "https://bobobo.fandom.com/wiki/Neo_C-Block?oldid=20330"
Community content is available under CC-BY-SA unless otherwise noted.