OVER's Castle (OVER城, Ōba-jō) is a location and a group from the manga and anime series, Bobobo-bo Bo-bobo. It is a pagoda-style castle, under the command of OVER of the Maruhage Four Heavenly Kings.

As one of the Four Heavenly Kings of the Maruhage Empire, the demonic being known only as OVER leads the most ruthless, brutal and obedient section of the empire's forces. OVER himself is a force to be reckoned with: a powerful being evil in the eye who crushes opponents either with his massive pair of scissors or through his trial combat with anyone who gets in his way. Those who encounter OVER have one of two fates befall them: they become scalped out of OVER's loyalty to Tsuru Tsurulina IV, or they receive death. The most horrific means of death revolves around his usage of a special "Kill Seal" that saps away the power of anyone touched by it until they become nothing but a husk of their former self. Perhaps even scarier than OVER, though, is another form he takes which is much more powerful and demonic than even the scissor-wielding warrior.

Working underneath the rule of OVER is a unique group of assassins, specializing in various means of assassination skills and team tactics. Based out of their leader's samurai castle headquarters, the assassins use various cutthroat tactics such as manipulation, deception and ninjutsu to turn the battle towards their favor. While there are several independent subordinates working for OVER, his main squad are the "Five Hidden Killers", who are a team of unique ninja warriors who each fight in their own means, particularly to guard his castle from any intruders who may disturb him from his work. 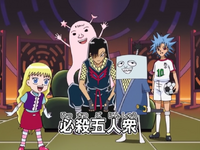 (必殺5忍衆, Hissatsu Go Ninshū), also simply known as The Deadly Five (必殺五人衆, Hissatsu Go-nin-shū), and The Ultimate Five Assassins in the English dub: A team of five ninja who serve OVER and protect his castle headquarters, much like Gunkan's Five Warriors. The Deadly Five Ninjas use various assassin and ninja maneuvers to fight their opponents. 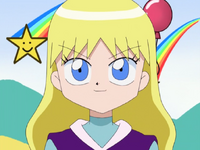 (ルビ, Rubi): The first member of OVER's Deadly Five Ninja. Ruby is a small girl with long blond hair who appears to want everyone to play with her in her room instead of killing them. But while she's innocent and friendly, she actually has the ability to brainwash her opponents into playing all day, making them oblivious to the moment she finally assassinates them. Though Don Patch easily ignores this tactic and has no mercy in expressing his rage, Tokoro Tennosuke in particular doesn't want to fight little girls, and takes pity on her, teaching her not to act like a spoiled brat, and she finally realizes what she's done. Admitting defeat, she lets Bo-bobo and the others move on.

During the Fifth Maruhage New Emperor Playoff, she makes it all the way to the finals. However, she is used as a sacrifice by the Reverse Maruhage Empire. 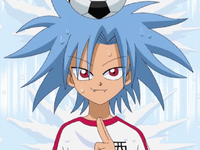 (無限蹴人, Mugen Shuuto): The second member of OVER's Deadly Five Ninja. Infinite Shoot appears to be a young soccer player, who ends up challenging Heppokomaru on his level. He has the ability to transform his jungle settings into a chamber of molten lava (despite not knowing he can pull off such a feat) and attacks his opponent with a kusarigama. While Infinite Shoot does carry a soccer ball with him, it's actually just a bento lunchbox. When he fights Heppokomaru, he accidentally removes his neck belt, and gets crushed by the power of the his Baby Mode. He also says that he is a master at ping-pong.

Infinite Shoot later makes a cameo during the Fifth Maruhage New Emperor Playoff, but does not get a noticeable role like Ruby or the Three Major Civilizations. 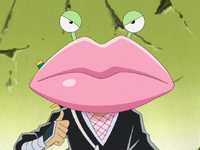 (おちょぼ口君), also known as Puckered Lips in the English dub: A ninja with a mouth for a face, he reveals himself in Hajike Block after Rice's defeat to fight him and extend an invitation to take on his master, OVER. He mainly attacks through common ninja tricks, but besides his ninja abilities, he also possesses an ability to vacuum anyone inside of his mouth to send them to the location of his choice. 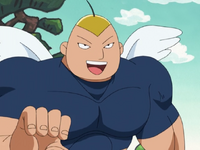 (ガンプ, Ganpu): The guardian of the castle lawn. He possesses wings on his back, but they are just for show. His flying ability truly comes from the antennae on his head. He is rather easily defeated from a collaborative effort of the whole Bo-bobo team (and a little Kinnikuman battle tactics). 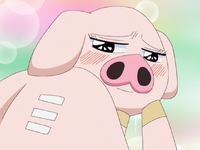 (ブタのケツのトビラ, Buta no Ketsu no Tobira): A large pig who is halfway built into the wall of Ruby's playroom. His buttocks supposedly serves as the doorway to the next floor.

Guy Inside the Pig's Butt Door

(ブタのケツのドアの中にいた人, Buta no Ketsu no Doa no Naka ni Ita Hito): A person wearing a three-eyed mask who lives behind the Pig's Butt Door (as it would turn out, the door does not lead to the second floor). Beauty, having realized that she opened the weird door for nothing, took her frustration out on the guy, using the Palo Special technique.[1] 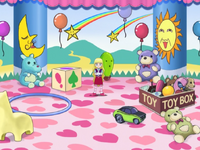 A colorful room that looks like a simple playroom for small children. This area is guarded by Ruby. 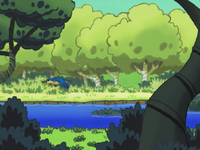 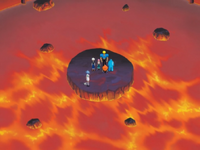 A room modeled to look like a jungle, which is guarded by Infinite Shoot. 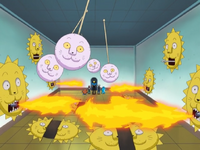 (トラップルーム, Torappu Rūmu): A large room that is full of traps, including flamethrowers, giant man-crushing pendulums, and bottomless pits. If the enemy makes it past these traps, then the room will begin to flood with coffee. Near the center of this room, there lies a cage trap where the victim will be tortured with giant fans. 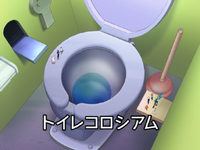 (トイレコロシアム, Toire Koroshiamu): An arena in the form of a giant toilet, which is guarded by the Three Major Civilizations. As weird as it seems, the toilet comes fully equip with everything that a normal toilet has (including a giant toilet seat to flatten the combatants). The greatest danger comes in the toilet water, for if one falls into the water, they will expand until they burst. According to Bo-bobo, this coliseum has won a number of 1st place awards in categories such as: 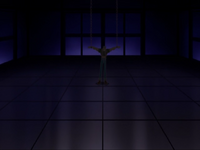 The very top of the castle. At first it appears to be just an unfurnished room, with walls flimsy enough to come down after a few knocks from Tokoro Tennosuke's fist. However, if provoked enough, OVER will transform the room into his true battleground: Desperado Colosseo [2].

Locations
Retrieved from "https://bobobo.fandom.com/wiki/OVER%27s_Castle?oldid=19616"
Community content is available under CC-BY-SA unless otherwise noted.