(横浜ジョー, Yokohama Jō): User of "Undead Shinken" (Fist of the Undead). As a member of the "Neo Assassination Corps", he attacks Bo-bobo's team in the cemetery with Don Patch's "fighting ability". He doesn't really do anything himself. He rather leaves the fighting to his zombies. After Don Patch attacked Joe with his "god" bike license attack, Joe transformed into a zombie demon like form. He is ultimately defeated both by Bo-bobo's nosehairs, and Don Patch stealing a crocodile from a below panel to attack him with. 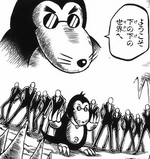 (白銀のモグ, Shirogane no Mogu): A mole who lives under the cemetery and leads a platoon of crocodiles, he ends up encountering Gaoh and Beauty after the two of them are pulled underground during Bo-bobo's match with Yokohama Joe. He is eventually confused by the little koala before being broken by his attack.

(剣・舞): A ducktailed man with an U.S. flag shirt who assists Master JOY.

(至郎田正影) One of Usui's subordinates, as well as a character from the manga and anime of Majin Tantei Nougami Neuro.

Masakage made a small appearance in Shinsetsu Bo-bobo. Masakage served as one of Usui's henchmen, where his general form of attacking was trying to get the rebel, as well as Usui, to sample his dish (which, of course, no one will). Not long after his initial appearance, Softon swiftly dispatches him with a giant poop-coil.

In his own series, Shirota Masakage was a mad chef, who committed murder over the disapproval of his "Ultimate Dish" (A soup secretly filled with steroids, drugs, and other disturbing things, all for the purpose of beefing up the flavor). One syringe filled with the concentrated form of this dish, was enough to transform Masakage into a hulking figure, with darkened skin, and huge upper-body muscles, making him ridiculously strong. Despite his attempts to hide the murder along with the effects of the dish, Neuro (the series main protagonist) easily defeated him, and brought him to justice.

(ヴィク鳥ーファイター, Vu~ikutori ̄Faitā): A chicken-headed man who assists GURA, he is able to turn into a very small flying chicken. He is also a master Victori Shinken.

(カツオ谷ふみ男): A fish-headed man who assists GURA. He is able to turn into a merman. Fumio is also a master of Fish Shinken.

(ブメラングパンツ丸, Bumerangu Pantsumaru): A living pair of panties who encounters and ultimately assists Jati. He attacks with "Pants shinken". While he appears to be very powerful during his fight with Babuu, he is accidentally killed by Hiragi prior to their fight with Bo-bobo. However, his corpse is later seen being used as a parachute by Hiragi and Jati.