Patchbobo (パッチボボ, Patchibobo), also known as, Rocks-Bobo in the English manga, is a character from the manga and anime series, Bobobo-bo Bo-bobo. He is a fusion of Don Patch and Bo-bobo, with Don Patch's name first in the fusion order originally meant for Bobopatch.

In the middle of a Sangaria battle against Jeda the Wind God, Bo-bobo and Don Patch choose to fuse together into Bobopatch. Once inside, Don Patch makes his way to the "control center" inside Bo-bobo's head. After knocking out the two men operating the controls and spreading natto everywhere, Don Patch looked at Bo-bobo's control screen and saw Bo-bobo's name came before his own. Outraged, he switched the order of his name and Bo-bobo's around, since he saw himself as stronger and more important than Bo-bobo, and created a new fusion: Patchbobo.

Like the majority of fusions, Patchbobo lasts one minute.

Patchbobo is a tall male being who wears a long light-blue jacket open at the bottom with torn sleeves and the "sun" symbol of Don Patch on them. He also wears dark-blue pants and silver-tipped boots, accompanied by gloves that alternate between the two blue shades of the rest of his outfit, and has a small kamaboko shoulder guard on his left shoulder. His hair appears to be a mix between Dragonball's Super Saiyan form, with the red-shaded outer-highlights based on Yugi Muto from Yu-Gi-Oh!.

An extremely serious individual, Patchbobo immediately understands the time limit of his own existence and makes his main priority to attack the enemy to bring his battle to a quick, victorious end. However, due to the more equal nature of Bo-bobo and Don Patch working together, the two can end up arguing over battle tactics, leading to them wasting as much of that minute and possibly leading this powerful being to break apart without finishing its battle. Patchbobo's main ability is Material Hajike Fusion (物質ハジケ融合 Busshitsu Hajike Yūgō)/Wiggin' Funky Fusion, which involves the fusing two objects or being into something new that can be used in battle. By placing one hand on an object and his second hand on the other object, he is able to fuse them together into a completely new thing that he can use to his advantage. 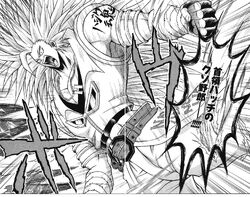 When fighting against Usui of the Black Gambling Corp of the IXEX (the Nine Experts) Bo-bobo and the gang dominate the battle. But when Usui uses his ninja skills to become a giant, Bo-bobo and Don Patch fused and Don Patch switched the "components" again, becoming Patchbobo. But when he couldn't defeat the ninja warrior, Don Patch pushes a button he wasn't supposed to touch in Bo-bobo, fusing their "Hajike Souls" together into a second-stage fusion warrior. Like Patchbobo, Pa-papatch can only last for one minute.

A powerful, humanoid male warrior wearing a pair of pants and a long jacket. His hair is very long and spikey, similar to Dragon Ball's Super Saiyan 3 form. Despite being very serious, hajike is a prominent part of this fusion, with the words "Hajike Soul" written on his left shoulder and "No Hajike no Life" on his jacket. Bo-bobo's glasses appear as the zipper for the jacket while Pa-papatch wears Bo-bobo's "Hajike Mark" necklace.

PatchBobo full body
Add a photo to this gallery