Pomade Ring (ポマードリング) is a location and a group from the manga and anime series Bobobo-bo Bo-bobo. It is a floating fortress, under the command of Gunkan of the Maruhage Four Heavenly Kings.

The first of Tsuru Tsurulina IV's Four Heavenly Kings, Gunkan appears to be the most loyal and obedient of the Maruhage forces, fighting against threats to his reign such as Bobobo-bo Bo-bobo and Heppokomaru. However, outside the exterior of a Hair Hunter is an enigmatic man: one part nose hair manipulator, one part Wiggin, and completely against anyone who gets in the way of his own ambitions. Twisted by his childhood in the Hair Kingdom (of which he was not a citizen), Gunkan fights against the enemies of the Maruhage Empire...while subsequently fighting against the Maruhage as well, believing that they get in the way of his ultimate ambitions of ruling an empire of his own. And yet even with all of his battles and desires, his ultimate obstacle is Bo-bobo, his self proclaimed greatest rival. With Bo-bobo both a former friend and an enemy against the Maruhage Empire in his own right, his battles become personal as he tries to defeat him not for the empire's desires...but for his own pride.

Because Gunkan is technically a Maruhage warrior, he has been provided the resources of the empire to help him on his own battles. His main headquarters is the Pomade Ring, a massive floating ring fortress he can transport towards anywhere in the world where he wishes to fight. Because of recent activities in crushing rebels in Heppokomaru's hometown of Puppuu City, the Pomade Ring is mostly seen floating above that area keeping watch on the former battleground. Within the fortress, Gunkan is found leading a massive militia of warriors, including a loyal female vice-leader, his own personal army who fight for him and maintain the Pomade Ring as well as two monstrous assassins who go after rebels of the empire at his command. Battleship's most loyal warriors, though, are The Battleship Five Quartet, a squadron of five (sort of) warriors kept masked until the moment they enter battle, upon which they reveal some of the strangest and more powerful warriors in the empire. 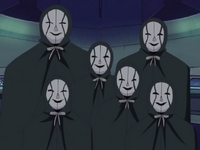 (軍艦5人衆, Gunkan Go-Ninshū)/The Battleship Five Quartet: Five (and six) elite warriors who serve Gunkan. All of them remain hidden under cloaks and masks, until the moment each one goes into battle. When Bo-bobo's team infiltrate the Pomade Ring, they must fight each one in a series of one-on-one battles, based on the warp panel chosen (though Heppokomaru almost fights all of them at once, during the beginning of his turn). In Bobobo-bo Bo-bobo Ougi 87.5 Bakuretsu Hanage Shinken, Bo-bobo fights all five of Gunkan's Five Great Warriors. 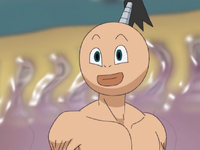 (ふんどし太郎, Fundoshitarō)/Loincloth Lloyd: A teenage boy wearing only a red fundoshi. He is first of Gunkan's Five Great Warriors, as well as Heppokomaru's childhood friend who stayed behind in Puppuu City, allowing him to escape for help. His main fighting skill is Fundoshi Assassination Technique (ふんどし殺法, Fundoshi Sappō), which allow him to manipulate his fundoshi as a whip to attack opponents, as well as a propeller to fly in midair and deflect projectiles.

He is first seen during Heppokomaru's recount of how Gunkan destroyed their hometown: Puppuu City half a year prior. As Fundoshitarou and Heppokomaru catch their breaths, he mentions how powerful Gunkan is and that Puppuu City wouldn't be able to survive much longer. He then tells Heppokomaru to find someone who can save their city. As a group of Hair-Hunt troopers show up, Fundoshitarou takes to the skies with his fundoshi as a propeller, and attacks them with "Fundoshi Assassination Technique: Helicopter". As he defeats them, Fundoshitarou buys Heppokomaru time to escape, while using "Akafun Dance" as a farewell salute.

When the rebels encounter Gunkan, he taunts Heppokomaru by waving around Fundoshitarou's fundoshi in front of him. After Heppokomaru questions if Gunkan killed him, he tells him that while Fundoshitarou refused to become a member of his group, they mainly got rid of him because he angered them, provoking Heppokomaru to attack him. 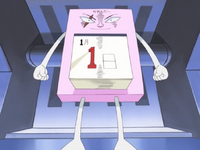 (カレンダー, Karendā): Calendar is just that; a living calendar, with a scar on his right eye. Appearing to be the second of Gunkan's Five Great Warriors, Bo-bobo easily takes him apart by ripping off his pages sequentially, with every one of his pages revealing a new weird holiday. 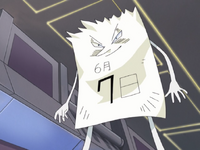 (6月7日, Rokugatsu Nanoka): The son of Calendar and the real second member of Gunkan's Five Great Warriors (though he could be the third), this calendar page appears shortly after Calendar's defeat to avenge his fallen father. Instead, he is forced to take a trip into "Bo-bobo World" where he goes insane due to the crazy antics of this world. In the dub, he has an Austrian accent. 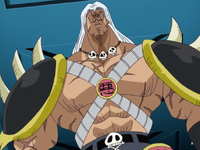 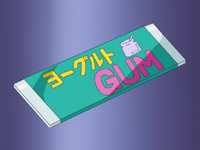 (ガム, Gamu) The fourth member of Gunkan's Five Great Warriors and Tokoro Tennosuke's opponent, it is exactly what it sounds like: a lifeless stick of yogurt gum lying on the ground. The real test was what would a dog eat: Tennosuke or yogurt gum? After the dog eats the gum, not only is it gone forever, but it takes the victory in the battle. After the Pomade Ring collapsed, the dog returns to take a lick of Tennosuke, who lies underneath the debris and dislikes the taste of him. Due to being eaten, the Gum is now considered dead. Despite having no fighting ability in the series, Gum is a mini-boss in Bobobo-bo Bo-bobo Ougi 87.5 Bakuretsu Hanage Shinken. 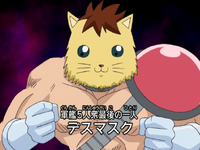 (デスマスク, Desumasuku): The last of Gunkan's Five Great Warriors. Much like June 7th, he is also able to dodge Bo-bobo's Hanage Shinken. He follows Bo-bobo into the land of Babylon (on orders of Gunkan though claims he needed to go to the bathroom.) He reveals himself to be a well muscled man, with the head of a kitten. After Bo-bobo figures out his own weakness, he defeats Death Mask with a seemingly weak arm chop. 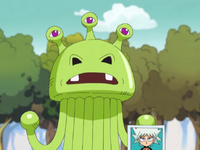 (お茶づけ星人, Ochazuke Seijin)/Mean Green Soup Alien: A green alien that serves as an assassin for Gunkan, he has three eyes and tentacles. He has one special ability; with his green soup beam that he shoots from his eye that makes the victim be overly obsessed with "ochazuke" (green tea with rice in it). Being a tentacled creature, he fights much better underwater than on land. Due to his "Ochazuke Beam", his major goal in life is to make people love ochazuke.

He is first seen trying to find and kill Heppokomaru, but his mission is forgotten when he encounters Bo-bobo's rebel gang during the middle of a play. Thanks to some persuasion from Beauty, Bo-bobo challenges the alien to protect Heppokomaru,... but instead, runs into a lake to find some pilaf! Though Ochazuke Alien is more adept underwater, Bo-bobo's hajikelist skills weird out the alien, and their battle concludes as the end of Bo-bobo's ridiculous play. Afterwards, Ochazuke Alien reveals his employers' name and leaves. The alien later appears again in the Haunted House part of A-Block to congratulate Heppokomaru on his wedding (which is really just a hajikelist gag). 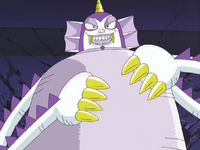 (壁男, Kabeo): Wall Man is a monstrously large being. He has two very long arms, what appears to be fins on the sides of his face, and a horn on top of his head. His biggest feature is his mid section, which hides his legs (if he even has any). He has only one ability; by absorbing opponents within his wall-like body, he can steal their skills.

Wall Man serves as an assassin of Gunkan, and he is sent out to find Heppokomaru in order to steal his "Onara Shinken" ability. He finds him at C-Block's "Aitsuhage Tower", where he easily absorbs the C-Block leader, Geha the Gale. He then sets his sights on Heppokomaru, but when he witnesses Bo-bobo's "Hanage Shinken", he remembers that Gunkan shares the same abilities, and decides to retreat and report it back to him. Wall Man never gets the chance, as he is knocked out when the tower flies off and crashes elsewhere, while driving in circles with taxi driver Don Patch inside the tower. 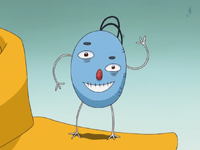 (ドールマン, Dōru Man): A sentient bean bag doll who serves under Gunkan, and has the ability to transform anyone into a doll.

He is first seen on top of Suzu's shoulder, after returning from their mission to destroy B-Block. After Gunkan mocks Heppokomaru's feelings for Beauty, he has Doll Man transform Beauty into a doll. After commenting that Beauty is as cheap as the doll he turned her into, Heppokomaru grabs him in anger, demanding he turn her back. Doll Man agrees to, but after Gunkan reveals that he lacks the ability to turn her back, Heppokomaru throws him onto the ground.

After Gunkan takes Beauty and Suzu teleports them back to their base, Doll Man tells the group that Gunkan commands a group called "Gunkan's Five Great Warriors", and boasts that they'll never win. Bo-bobo then defeats him with an uppercut "That's Gorou! That's Gorou!". 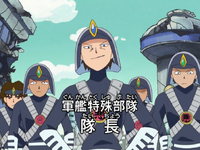 (軍艦特殊部隊, Gunkan Tokushu Butai)/Captain Battleship's Special Forces: Grunt soldiers for Gunkan, fighting in masses against opponents and controlling the Pomade Ring headquarters for him as well.

(ブータン, Buutan): An odd looking creature that apparently works aboard the Pomade Ring. Butan becomes sleep-deprived after witnessing the all of the weird things that the rebels did during their assault on the flying fortress, most notably the flashing of Serviceman.

A Dog That Eats GumEdit

(ガムを食う犬, Gamu o Kuu Inu)/Fluffy: A dog that appears during Tokoro Tennosuke's battle with Gum. His role is to decide which one of them to eat, and ultimately chooses Gum. After the destruction of Pomade Ring, he finds Tennosuke lying underneath the debris and licks him, but quickly rejects him because of the way he tastes.

Locations
Retrieved from "https://bobobo.fandom.com/wiki/Pomade_Ring?oldid=19754"
Community content is available under CC-BY-SA unless otherwise noted.