Princess Chinchiro is the first of the IXEX Black Gambling Corp to be introduced. In her first appearance, she and the other two gambling corp members, GURA-san the Punisher and Usui, were ordered to defeat Gunkan and his forces. The three of them succeeded without any difficulty at all.

In her next appearance, she has already beaten Lambada, Jeda the Wind God, and Rububa the Bubbles by herself, showing how powerful she is. Bo-bobo and the gang meet her in the Itabasi Ward near multiple casinos, and immediately challenge her. Chinchiro then assumes her second form and starts the fight by summoning a giant Dice Gambling arena. In this arena, Chinchiro plays multiple different dice games, but mainly Chinchirorin, where she tries to get the dice in a winning combination.

Whenever Chinchiro wins the game, Bo-bobo's teammates are tortured in some way, such as Hatenko and Pokomi being turned into dice blocks, or Bo-bobo getting attacked by a living casino! Chinchiro's game is finally brought to an end when Hanpen secretly attaches his face (disguised as the "sixth" side of a dice block) to one of her die and then reveals the true number: "one" (one is an unlucky number in Chinchirorin), canceling out the combo, and causing Chinchiro to lose. Surprised at losing, she instantly assumes a demonic-like form and tries to destroy Bo-bobo herself. But a quick trip to Bo-bobo World and a final attack by Bo-bobo and King Nosehair knocks her out.

She is later seen (reverted back to her second form) alongside Usui and GURA, in the ruins of their wards. The three silently watch their boss be defeated on a monitor screen.

Chinchiro's main ability is "Saikoro Bakuchi Shinken" (サイコロ博打真拳; "Fist of Dice Gambling"), an ability that is bound by her skills and abilities for rolling dice. Every roll of the dice she performs allows for her to summon a being that assists her in her fights, usually not directly but by either destroying or reflecting blows or, in the case of her Shinigami, changing her opponents into dice. The only non-dice related abilities through her Shinken involve Chinchiro's transformations, including a demonic transformation that finally allows her to use physical attacks as a last resort.

In her first form, Chinchiro has long dark colored hair, a black sleeveless shirt and black pants. She was first seen in this form.

In her second form (which was first seen when she had beaten the former Maruhage generals), Chinchiro's hair has turned black and is styled into a bun. She has a cluster of small flowers on the right side of her head and a Hannya mask on the left side. Her black clothes are replaced with a short skirt Kimono.

By putting her Hannya mask on her face and fusing with Pachidama Runaway Boy and Angel 777, Chinchiro can access her demon form. In this form, her hair has unraveled and has become wild, and she has two long horns on her temples. Her legs have become mechanical talons, and she has a demon mask floating on both sides of her body. 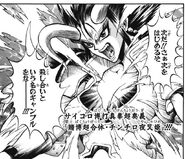 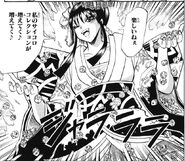 Princess Chinchiro's 2nd form
Add a photo to this gallery