The hometown of Heppokomaru, Puppuu City was destroyed by Gunkan's forces. With the city in ruins, the civilians most likely evacuated, and the city now serves as the location of Gunkan's floating fortress, the Pomade Ring.

(ロボ山田): A giant, floating, robotic head that left its robotic body in search of something that could better support it. In the manga, its actually the head of a man who had recently gotten fired. Bo-bobo uses it to to get into the Pomade Ring, and it is last seen crashed into it. 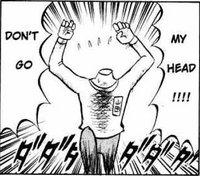 (最近却下された男, Saikin kyakka sareta otoko): The body of a man who recently got fired from his job and is chasing after his head, which felt its body wasn’t supporting it enough. Despite not having a head anymore, the body seems to still be fully capable of thought and speech. 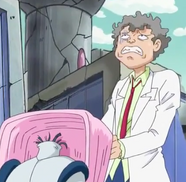 The anime counterpart of the recently fired man. A scientist who is desperately chasing after Robo Yamada while wheeling around its former body in a chair. Although he pleads and pleads for Robo Yamada to return, it has already made up its mind. 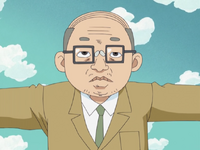 (鈴木広, Suzuki Hiroshi): A balding middle aged man with thick glasses. He is the section division of the third division of for L-Food Products of the Kabushiki Company, or at least was until he was recently laid-off one day prior.

After Bo-bobo kicks Don Patch out of the Pomade Ring, Suzuki shows up right outside, flying next to Heppokomaru and Softon (who are flapping in midair). After mentioning his job title, he also tells the rebels that he was laid-off a day ago, much to Bo-bobo, Heppokomaru, and Softon's shock. He then breaks into tears on how he couldn't fly (in the anime, he tells them that he wants to jump, implying suicide), while Bo-bobo is saddened by his story. Heppokomaru and Softon help cheer him up, lifting his spirits.

After Heppokomaru punches out Serviceman, both he and Softon land on the Pomade Ring alongside Suzuki, who tells them not to let their guard down as thing will get tougher. Once Don Patch and Tennosuke catch up with the rest of the group, he them that they are late.

When Gunkan begins the challenge between the rebels and his Five Great Warriors, Suzuki suddenly appears alongside them and volunteers to go first, much to Heppokomaru's shock. However, Heppokomaru ultimately decides to be first challenger.

Locations
Retrieved from "https://bobobo.fandom.com/wiki/Puppuu_City?oldid=18004"
Community content is available under CC-BY-SA unless otherwise noted.