The Reverse Maruhage Empire (裏マルハーゲ帝国, Ura Maruhage Teikoku), also known as the Shadow Chrome Dome Empire in the English dub, is a secret, evil organization from the manga and anime series, Bobobo-bo Bo-bobo, ruled by its emperor, Hydrate.

Deep below the surface of the Earth, below the feet of the members of the Maruhage Empire, there is a second empire located within the Dark World. A Reverse Maruhage Empire ruled in parallel to the original, controlled by evil, dominating forces who keep authority to those who live in the underground. Similar to both Tsuru Tsurulina IV and Tsuru Tsurulina III, this empire is ruled by a powerful emperor named Hydrate, who originally lived on the surface once. However, Hydrate had been banished to the deep, dark below, due to his own ambitions. Ever since his banishment, Hydrate has had only one thing on his mind: revenge against the ones who sent him away and to claim his self-proclaimed birthright to be leader of the real Maruhage Empire.

As powerful as Hydrate is on his own, he isn't the only one fighting against the forces of the surface. The beings who reside in the Dark World are notorious for the powers and techniques they possess within their grasp. The four members of the Reverse Maruhage Four Heavenly Kings in particular are masters of a special style of technique known as Yamiken, which may seem similar to Shinken abilities of the surface but with the advantages of greater power and the ability to upgrade using the style to a more powerful formation. Hydrate also has two right-hand and left-hand men at his side, who are both masters of Shinken abilities that are more powerful than the Yamiken of their underground peers and whose only purpose is the success of the future Maruhage emperor. However, as the plot between the two worlds slowly comes to fruition, Hydrate and his subordinates do not expect the resistance they would face on his road to complete domination.

(裏マルハーゲ四天王, Ura Maruhāge Shiten'nō), also known as The Shadow Big Four in the English dub: Much like the Maruhage Four Heavenly Kings, the Reverse Maruhage Four Heavenly Kings are Hydrate's strongest officials, next to his right-hand and left-hand men. They each have the ability to use Yamiken and activate the "Dark Ascension Ceremony", where the user magnifies his own power, in order to transform and become more powerful. This group of heavenly kings are said to be even more powerful than the original Maruhage Empire's Heavenly Kings. 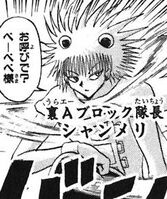 (電柱, Denchū): Leader of Reverse B-Block, another disciple of Be-bebe...even though its a living poll. 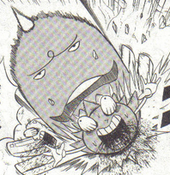 (分銅様, Fundō-sama): Leader of Reverse C-Block, this huge headed horned being is actually a living 1000-ton weight that crushes his opponents. He is defeated by Patchbobo. His hobbies include dividing trash.

(ナイチンガール Naichingāru): Leader of Reverse D-Block, she supplies scalpels to assist in Byakkyō's surgery attacks. Her name is a slight pun on famed nurse Florence Nightingale. She is defeated by Patchbobo.

(ツーガン G, Tsūgan G): Leader of Reverse E-Block, he's a one-eyed gunman working with Crimson. Fighting alongside Crimson and Chef Lin, he is defeated by Kintenbo.

(しぇふりん): Leader of Reverse F-Block. Chef Lin is a leech who wears an apron and chef's hat. He doesn't do much and didn't seem know what was going on (he gets himself shot several times by stray bullets during a cowboy shoot-out while talking to Bobobo out in the open). He claims that he is a champion in billiard.

(ニクニク星人, Nikuniku Seijin): Leaders of both Reverse G-Block and Reverse H-Block, they work alongside LOVE in the "Muscle Conveyor" chamber. Facing Don Patch as an opponent, they're almost adopted as his children, until he starts beating them up for giving him too much weight.

(note: the "niku" in their name can stand for the Japanese word for meat, but can also be put together as "nikuniku", which stands for "detestable") 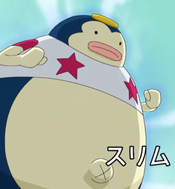 (スリム Surimu): A penguin creature that is Halon's Oni's assistant, until Halon decides to turn on him. His main ability is to stretch and increase muscle mass on his arms, allowing for powerful blows. According to Halon Oni, Slim is able to do this because he raises a giant inside his body.