(発毛獅志１６区, Hatsu Mou Shishi 16 Ku): The sixteen leaders of the various districts of Bi-bibi's "New Hair Kingdom", all of whom are summoned by their leader to take out his betraying sister, Bububu-bu Bu-bubu, as part of his ultimate plan for the Hair Kingdom. But with the return of Bo-bobo and his allies, they may have their work cut out for them...

(ファイン): Leader of the team guarding "South Rinse Tower" and the general of the 7th district of the Hair Kingdom. His abilities in "Biryūshi Shinken" (微粒子真拳; "Fist of Particles") allows him to control the tiniest building blocks of the world, letting him create anything he feels like. Using his abilities on behalf of Bi-bibi, he chooses to use them to destroy the opposing members of the Hair Kingdom through a "Keshi Keshikeshi battle" (a four-on-four decisive battle) involving rotating one-on-one combat, but does not care for sacrificing allies if necessary. Bububu-bu Bu-bubu uses one of her secret techniques to allow Bo-bobo to perform three Shinken to stop him: Onara Shinken, Moemoe Shinken and her own Wakige Shinken (Fist of Armpit Hair), which she herself taught him!

Fine is later seen defeated once again, at the hands of Tsuru Tsurulina III.

(ヤボウ): A grinning man wearing a Sandogasa straw hat that blocks out his eyes. While the leader of the Hair Kingdom 8th District, he doesn't do a thing outside and gets attacked by Bo-bobo alongside Icen and his other teammates. It could be possible that Yabō is a parody of Shunsui Kyōraku from Bleach, since they both wear straw hats and are both 8th leaders.

He is later seen defeated again, this time by the invading emporer, Tsuru Tsurulina III. 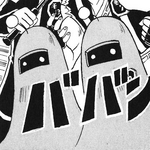 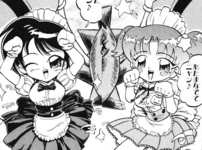 (レッド K) & (ブルー D): Respectively the leaders of the 10th and 9th Districts and working with Fine, these two are first seen as beings covered in huge helmets. But when they are revealed, both turn out to be two buxom SD maids who "nya" like catgirls. (perhaps a parody of the manga/anime Tokyo Mew Mew) The duo work together with their "Moemoe Shinken" (モエモエ真拳; the best translation would be "Fist of Cute Girl", with the "moemoe" concept connected to various shoujo series depicting young-looking, usually preteen girls) to lure in opponents with their cuteness and their tea, then subsequently smash them with their iron knuckles. Don Patch nearly falls for their act twice before finally gaining the resolve of a boxer, smashing through both of their cuteness!

(堕天使シェル, Datenshi Shil): A handsome angel and the guardian of 11th District, he uses the power of his "Angel Shinken" (エンジェル真拳; "Fist of the Angel) to release feathers at opponents and is also the main controller of the "Club Stage", which forces his opponents into believing they are in a night club (though Yūko realizes that both he and Hell Dolphin are incompetent).

(発毛１２区総隊長, Hatsu Mou 12-Ku Soutaichō): A fish wearing a nightcap, who uses "Umi no Sachi Shinken" (海の幸真拳; "Fist of Seafood"). The 12th District General appears only twice, during Bi-bibi's initial briefing and when it is easily blown up by Tsuru Tsurulina III's magic fireworks.

(ルナーク大佐, Lunac Taisa): A soldier-like man wearing two eye patches, he is the leader of Hair Kingdom's 13th District and one of Fine's assistants. His "Iessa Shinken" (イエッサー真拳; "Fist of Yes Sir") allow for him to create an army of miniature soldier fairies to attack for him whenever he lifts both eyepatches. After Bu-bubu stops him in the battle, Lunac tries to defend himself from his boss, but Fine turns him into a hair statue which he immediately smashes, killing him instantly. 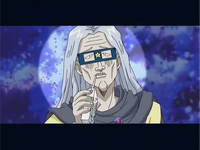 (とっても健康マン, Tottemo Kenkōman), formerly known as Weak Man (貧弱マン, Hinjaku Man): Trapped within a straight jacket and mask, he is Bird of Paradise's other companion and the leader of 14th District. His "Sokubaku Shinken" (束縛真拳; "Fist of Restraint") forces his enemies to become as constricted down as he is.

After Bird of Paradise's defeat, he reveals himself to be a much healthier version of Weak Man, but Bo-bobo and Don Patch still make easy work of him regardless.

As Weak Man, he is a random frail-looking man who appears during Bo-bobo Theater, when Bo-bobo tries to cheer Beauty up during the fight with Kabeo. His only line is "Cheerfulness is most important".

(ワサビーフ カール): A fat man in a beret who is the leader of 15th District and works alongside Bird of Paradise. His eyes and mouth are made up of numbers, which his "Buhittone Shinken" (ブヒっとね真拳; "Fist of "Buhittone") allows for him to count down to the point of releasing a small creature inside of him. Bo-bobo and Don Patch eliminate him and his partner easily after Bird of Paradise (possessed by Bi-bibi) is dealt with.

(発毛１６区総隊長, Hatsu Mou 16-Ku Soutaichō): A general with a huge Swiss Army Knife on his back. He is only seen when he is blown up by Tsuru Tsurulina III.