(ツルビーニャ, Tsurubīnya): A student of the Maruhage Elite Academy, the true E-Block leader of the Neo Maruhage Empire and the son of Tsuru Tsurulina III. He is intensely driven by jealousy, regarding his fellow classmate Yononaka Namero, particularly knowing that he was born with the powerful aura and potential of being the next Maruhage emperor (having being himself related to one of the elders who sealed away Namero's true power). This jealousy drove Tsurubinya to attack his fellow student time and again at the academy, being defeated over and over while watching Namero becoming a top student due to the massive power he both possessed and had locked within.

As Namero (now part of the rebels) heads to the Elite Academy around Mount Fuji to shut it down, Tsurubinya uses his own abilities to capture Namero, using a combination of "Zenmetsu-gan" pills and his own mastery of "Red Magic Shinken". But with all his training and pills, his ultimate desire is to fight against Namero's true power even after capturing him. Using a special seal release, he finally reawakens the evil aura of his classmate, but is instantly destroyed by Namero moments after awakening the empiric power within him. 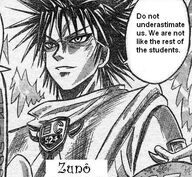 Four of the most powerful students at the Elite Academy, the squadron works together under their leader Zunō both for the empire and as a diversion for Tsurubīnya to stop Bo-bobo's team. Using a combination of "Zenmetsu-gan" pills together and their own academy skills, they fight Bo-bobo's team at an academy amusement park, particularly on the roller coaster "Black Cyclone" where they must put up both with fighting their enemies and the G-forces of motion. Working together, the quartet are able to seal off the powers of two of the Shinken users (Bo-bobo and Tokoro Tennosuke) and appear to make them both useless and open up fellow student Pokomi for attack...before she is saved by a transformed Don Patch, who, due to fighting without any Shinken, easily defeats the combined power of the four (as used by their leader Zunō).

(ズノウ): The leader of the four. Zuno is a boy with spiked dark hair and glasses who created an ultimate strategy for defeating all Shinken users, including Bo-bobo, Tennosuke and Pokomi in conjunction with his own Zenmetsu-gan-granted power (including an upgraded form combining his and his partners' Zenmetsu-gan power). However, his strategy collapses due to Don Patch (having transformed into Don Patch) not being a Shinken user and being unaffected by the ability, leading to his downfall.

(メル): The sole female on the team. Her main specialty is the creation of a barrier to protect her allies, though still weak to Pokomi's hammer.

(爽快スポ恋メロンBOY), also known as Melo: A melon headed boy, with a specialty of using melons in battle. He at one time was a melon living in a tree prior to gaining a body. (while attending the academy)

(ぶっ飛びニャンコ大臣, Buttobi Nyanko Daijin), also known as ZK-3333: A weird cat-like creature with a rocket on his head. He mostly uses general Academy abilities compared to his allies.

(ゲル): A former student at the Maruhage Elite Academy, he is sent to get rid of Pokomi after she fails to stop Bo-bobo. But after learning of her betrayal, Bo-bobo and Pokomi work together to defeat him.

(ユキダル): A snowman who is a subordinate of Gel.

Locations
Retrieved from "https://bobobo.fandom.com/wiki/The_Maruhage_Academy?oldid=17876"
Community content is available under CC-BY-SA unless otherwise noted.