The Three Major Civilizations (３大文明, 3 Dai Bunmei)[1] are a group of characters from the manga and anime series, Bobobo-bo Bo-bobo.

The Three Major Civilization are the final three of OVER's Five Hidden Killers. They fight together as a ninja team, who decided to name themselves after three of the first four great ancient civilizations of the world (with the exception of Egypt). Their battlefield is on top of a giant toilet known as the Toilet Coliseum. 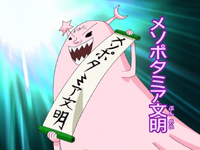 (メソポタミア文明, Mesopotamia Bunmei): A tentacled-horned nose creature, is the trap-master of the castle, controlling an entire room of nearly inescapable traps as well as consistently trying (and failing) to set them off during the battle with Bo-bobo's team. He also appears to try and use a "cloning jutsu". that is sort of obvious to its opponents (since the "clones" are just hot dogs cut into the shape of octopi).

(インダス文明, Indasu Bunmei): A firecracker dressed in ancient Japanese garb, is the quiet one (compared to his partners) who fights with a sword like a samurai and can open up his body to reveal something unexpected to assist him. 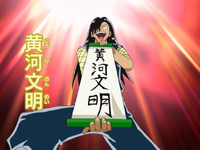 (黄河文明, Kōga Bunmei), also known as Yellow River Civilization in the English dub: The human leader of the trio. This one fights with a sword as well, but has various ninjitsu abilities such as a freezing sweat technique and curling.

OVER and the Legendary Idiot Killer

The fight between the Hajikelist trio (Bo-bobo, Don Patch and Tokoro Tennosuke) and the trio of assassins, takes place upon... a giant toilet. The fight begins randomly, until Heppokomaru and Tennosuke fall into the toilet. The water makes their bodies expand, and if left in too long, they will explode! The Three Civilizations's traps don't work out so well, but they make up for it by being extra sneaky! Bo-bobo tries his hardest to defeat the evil Civilizations, but even more becomes at stake, when Dengakuman and Don Patch fall into the toilet as well! Alone and outnumbered it would seem that Bo-bobo is outmatched, until Bo-bobo comes up with an idea to even the odds; he gets Tennosuke out by reading pages of his personal diary aloud, and gets Don Patch out by putting Ya-kun on a fishing pole.

With the fight now 3-on-3, the Civilzations try out some of their own personal techniques, but nothing, from Kouga's freezing sweat technique to Mesopotamian's clone ability, works out in their favor. The fight seems to turn around when they challenge the rebels to a small game of hockey, but it winds up closing the toilet seat on top of their heads! With their arms and legs stuck, it seems that no one can attack anyone... until Bo-bobo starts breathing fire! When the toilet seat finally comes up, the rebels use their most vicious attack yet; a fusion which leads to the warrior Bobopatchnosuke! The Civilizations still don't think much of the fusion and try to attack him, only to be branded by his swords face! Then, Bobopatchnosuke infects them all with Majide, and transports them into "Majide Time". Here, the ninja trio are told not to say "are you serious" (majide) or else random things will happen! However, the ninja's eventually say the forbidden words, and all sorts of crazy thing happen, including Mesopotamian being revealed to be a human, Kouga being revealed to be a woman, Kouga marrying Indus, and the world being blown up by Bobopatchnosuke! Finally, the fusion decides to finish this, by smacking them with his "Fist of the Eyelash"!

The Playoff and the Reverse Maruhage Empire

The civilizations are not seen again until the Fifth Maruhage New Emperor Playoff. Here, they meet Bo-bobo and Heppokomaru again in one of the lower levels of the contest, where they are forced to work together to defeat Ramen master Menma. Up to this point, they have been beaten by Menma once already, and have been hiding in a card board box in shame. When Bo-bobo shows up, they regain their resolve to beat him, and decide to defeat both him and Menma in her Ramen-Eating Contest. Their goal is to make a bowl of ramen, feed it to their opponents and get them to say that it is delicious, but they can't even get that right, as Mesopotamian makes a bowl of green sludge, and Kouga tries to pass off an Egyptian mask as ramen, and Indus guy just puts himself into a bowl. Then, their "meals" are put onto a revolving table, and they all stop in front of Mesopotamian, who must eat them all. Throughout the fight, the Civilizations are mercilessly battered by Bo-bobo. They finally put a stop to Menma, when Indus guy (who is now a dumpling) stops in front of her. Since she doesn't eat him, she herself is disqualified from her own challenge. Bo-bobo then rewards them for helping him, by smacking them one last time with his Hanage Shinken. At the end of the Reverse Maruhage Empire arc, the civilizations run a small restaurant.

Because of Tsuru Tsurulina III's orders to have everyone from the fourth era punished for their failures, the three are tortured by being tickled by metallic glove. After the fall of the Neo Maruhage Empire, the three are seen sitting near a river.