The Three Prison-Murderer Brothers (獄殺３兄弟, Gokusatsu San-Kyōdai), also known as the Terrible Triplets in the English dub, the Super Hell Bros. in the English manga, are a group of characters from the manga and anime series, Bobobo-bo Bo-bobo.

The last of the Hell Killers are three brothers who work together as one unit. All of them use "Fist of Brothers" (兄弟奥義: Kyodai Ōgi) to fight and Together, the brothers are the guardian of the "Climb High Tower" attraction of Hallelujah Land, and are able to fight their opponents either split apart or as a brotherly team. But none of them expect the teamwork (or lack of) that Bo-bobo and his allies bring when they face them down. 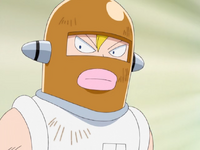 Beep (ビープ): The youngest brother, who is a muscular man wearing black pants and a white tank-top. Beep fights with huge cat gloves on his hands and wears a huge helmet on his head that protects his bishonenous looks (these looks can act as a distraction towards his enemies). He really hates poop, so defeating Softon is one of his number one priorities (In the English dub of the anime, he is lactose-intolerant, since Softon's head looks like ice cream). 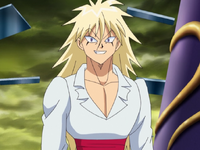 (メガファン, Megafan): The middle brother. Megafan can manipulate chewing gum that will have dangerous effects towards anyone that gets hit by it (including one that kills his opponent with its smell 30 minutes after being hit by it). He also can attack with a pair of scimitars. Out of all the brothers he is the tallest, and looks the most like a human (Beep always hides behind his mask, and there's no telling what Haou is). His clothing has a pirate-look and he carries around two swords, but hardly ever uses them. 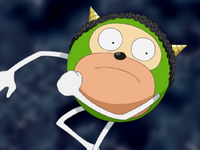 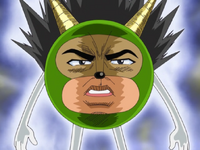 (覇王, Haō): The eldest brother, who is a small, green demon-like creature. Haou has frizzy black hair, and two small horns sticking out of his head. He doesn't say as much as his younger brothers and merely attacks with his fists. But his true abilities are unleashed whenever his two younger brothers transfer their power to him, allowing him to use the strength of all three at once.

The Three-Prison Murderer Brothers first appear without warning to ambush Bo-bobo and the others. They mangage to capture Suzu and Beauty (and brutilize Tokoro Tennosuke and Dengakuman). They are rather cocky at first, but when Softon shows up, they realize that they must resort to dirtier tactics. Megafan drags the girls to the top of their tower and traps them in his "Hell Gum". The gum lets off a revolting stench, and if Bo-bobo can't save them within 30 minutes, then the girls will die! But saving them is no easy task, as the rebels won't just be climbing the booby-trapped tower, they'll be fighting the brothers as well.

While climbing the tower, the rebels fight off the attacking brothers, (with techniques that are heavily influenced by Softon), until Don Patch arrives to help. The fight then turns in the rebels favor, as they begin to assault the brothers with their hajike skills, forcing the brothers to give all their energy to Haou, making him extremely powerful. Despite this, the rebels are still not impressed. Bo-bobo decides to finish them with his "Bo-bobo Roulette", an attack so random, that not even Bo-bobo knows what will happen to them! The brothers face an onslaught of meteors, ninjas, gender-changing, and one final attack from Bo-bobo's Hanage Shinken. Even their attempt to at least finish of Beauty and Suzu fails as well, as Softon secretly rescued them during the roulette attack.

The brothers later become participants in the fifth Maruhage New Emperor Playoffs, where only Haou manages to make it to the finals. He is later used as a sacrifice for the Reverse Maruhage Empire and his body takes a poorly drawn form. Haou returns to normal after the empire is defeated.