The World of Babylon (バビロン界, Babiron-kai), also known as World of Blabs-a-Lot in the English dub, is a location in the manga and anime series, Bobobo-bo Bo-bobo. It is a dimension that can be accessed through Softon's "Gate of Babylon".

The World of Babylon is a dimension summoned by Softon, and can only be accessed through the "Gate of Babylon". Upon first glance, the world appears quite peaceful, with colorful flowers growing from the ground and white clouds, each with it's own unique shape (for example, one cloud is shaped like a lollipop, while another like an elephant). However, the nonsense that goes on in this dimension could rival even Bo-bobo World's randomness. Bo-bobo pays a visit to this dimension in order to discover what his fatal weakness is.

(バビロン界長老, Babiron-kai chōrō): A strange old man found in a washing machine, with "Babylon" (バビロン) written on his shirt. He offers to be the rebels' tourguide, but is quickly upstaged by the Babylon Guidance Corps. 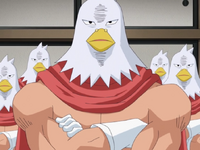 (バビロン案内隊, Babiron An'nai): A absurdly large group of men wearing bird masks and capes, they serve as the tourguides to the Babylon realm. However, all of them are nonsensical beings, who aren't that useful as tourguides. Instead, they seem more interested in assisting in hajikelist gags. A good portion of them were hatched from Bo-bobo's afro.

The tourguides are all exactly the same aside from their names (one is named Hiroshi, and another is named Satou). 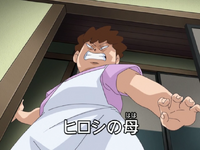 (ヒロシの母, Hiroshi no haha): A woman who mistakes one of they Babylon guides for her son, Hiroshi.

Shortly after one of the Babylon guides cause a commotion for the the rebels, she barges into the room, calling him "Hiroshi", as he, Bo-bobo, and Don Patch call her "mom". She then demands to know what he is romping in the house and that he take off his mask. As she tries to pull his mask off, he tells her that he's actually the guide to the World of Babylon, and that he isn't Hiroshi.

(モグタン): A mole on a leash that claims to be Don Patch’s pet. As soon as he’s introduced, Bo-bobo shoots him with a ray-gun, turning him into kamaboko (かまぼこ), a type of fishcake. 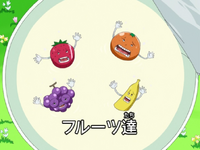 (フルーツヨーグルト, Furūtsu Yōguruto), also known as Fruits (フルーツ達) in the anime: A group of living fruits sitting in a giant yogurt container. As the rebels explore the World of Babylon, Bo-bobo (in a fish costume) tries to add fish to the fruits' yogurt, claiming that fish yogurt is growing popular in France, much to their protest. Beauty tells him that if he harms them, they'll be ruined, but Bo-bobo jumps in anyway to find out. After ruining the yogurt, Bo-bobo claims that he didn't, which Beauty disagrees to. 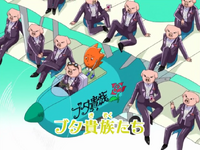 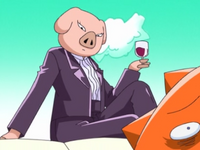 (ブタ貴族たち, Buta Kizoku Tachi)/Swine Aristocrats: A group of formally-dressed pigs flying an airplane. While Beauty watches Bo-bobo ruin the fruits' yogurt with fish, she notices the pigs on top of a flying airplane, with Don Patch as their prisoner. Don Patch had apparently offended them by dropping his pork.

In Bobobo-bo Bo-bobo Secret Technique 87.5 Explosive Fist of the Nosehair, one of these pigs happen to be the first of the Four Heavenly Kings of the Flower Demon King. He also enjoys practicing in dandyism.

(協力の男, Kyoroku no Otoko): A strange man who appears out of nowhere in the World of Babylon with the same weird, surprised expression on his face as the one on Beauty’s as she reacts to some crazy antic. He gives her a thumbs up and runs off saying he’s sure they’ll meet again, and is then promptly hit by a truck and never seen again. In the anime, he is replaced by the group of Babylon Tour Guides who act shocked, but give their thumbs up. 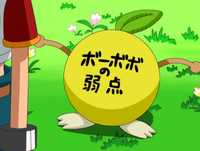 A round, yellow fruit with "Bo-bobo's Weakness" (ボーボボの弱点, Bo-bobo no Jakuten) written on it. After Beauty questions if Bo-bobo even has a weakness, it shows up in front of her, but she simply glares at it. Thinking it's been detected, the creature runs away from her and watches from behind a bush. According to the narrator in the anime, Beauty decides not to follow it, questioning why anyone would want to follow such a thing.

(正しい老人, Tadashī Rōjin): A crazy-looking old man who makes a special appearance just to assure everyone that Bo-bobo has, indeed, found his weakness.

Locations
Retrieved from "https://bobobo.fandom.com/wiki/World_of_Babylon?oldid=17729"
Community content is available under CC-BY-SA unless otherwise noted.