A strange enigma within the Hair-Hunt organizations. Z-Block would normally be considered the weakest of the Maruhage Empire's bases due to being at the end of the alphabet. But in reality, this block is the strongest of all letter-based blocks, partially as a means to eliminate those who wish to try and take it down by starting from "the weakest". Normal soldiers here are considered equal to the strength of A-Block leader Tokoro Tennosuke, while the elite warriors are some of the most powerful (and confusing) opponents the Empire has to offer.

To make matters even worse for those trying to defeat it, the true entrance to Z-Block lies actually within Robo Block, a beachfront area controlled by a group of hair hunting robots known as the Robo Team. 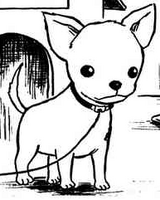 (ケルベロス, Keruberosu): A small chihuahua who is also the official guard dog of Z-Block's base. Beauty tries to feed Cerberus some food, but he smacks it out of her hand and eats it anyway. He then states that he has become guardian of the underworld and has lost contact with humans. Don Patch claims to have known him three years prior. Cerberus only appears in the manga. 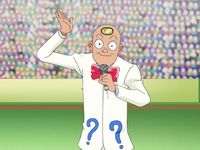 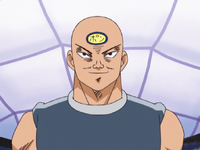 (ぽん太郎, Pontarō): The very first fighter faced in Z-Block is actually the host of the game show "Quiz Kegari De Pon" (クイズ毛狩りでポン). Bo-bobo, Don Patch, and one other contestant enter the show and get most of the questions wrong, but his true intentions are to get rid of Bo-bobo so he won't have to face him. Pontaro is defeated when Bo-bobo, transformed into a train by his final question, runs him over.

A variation of this show, complete with Pontaro as the host, is found as a mini-game on the Gameboy Advance video game: Bobobo-bo Bo-bobo Explosive Battle Hajike Wars, where the questions are all Bo-bobo related trivia. 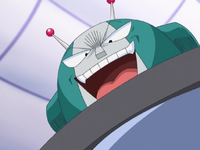 (ラジオマン): Unlike what his name suggests, Radioman is a giant television set who can permanently trap anyone that goes inside of his television screen or any of the programming he shows. Working inside of him is Shou Mei. He is destroyed when Bo-bobo turns into a giant dragon. 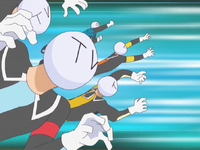 (テレビ戦隊): Within Radioman exist multiple subordinates referred to as "channels", who wear colorful costumes with blank circular faces with "TV" written on them. However, their heads are really just helmets that hide their human faces underneath.

The channels are sent out in an attempt to drag the rebels inside of Radioman. However, the channels are shown to very weak, as they fail to drag anyone so much as an inch. One of the members even attempts to bribe Heppokomaru into following him, but manages to convince Don Patch. 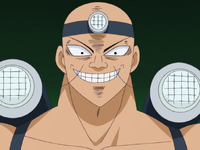 Shou Mei (ショウ・メイ, Shō Mei): His name is the Japanese word for "illumination". The mastermind who controls Radioman, he attacks with several powerful lamps that are hanging all over his body. While his attacks seem to easily defeat Bo-bobo, it also unleashes another form of the afro warrior that puts a stop to him. 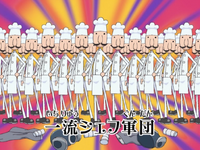 (一流シェフ軍団, Ichiryū Shefu Gundan)/Elite Chef Unit: Unlike the Hair Hunting forces of the other blocks, all of the Z-Block hunters are in actuality a corp of identical-looking first class chefs, who end up nearly suffocating both Beauty and Heppokomaru due to lack of space. All were claimed to be even stronger than Tokoro Tennosuke. 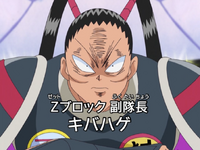 Kibahage (キバハゲ)/Zeb Ziegler: The vice-leader of Z-Block, a man with twintails. He first appears by hatching from an egg laid by Bo-bobo after he had transformed into a dragon. He claims that he had waited five years to take on Bo-bobo, the two end up playing a strange game against each other. 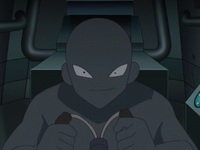 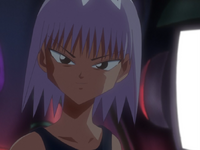 Dengakuman's Subordinate (Silhouette) (田楽マンの部下（シルエット), Dengakuman no Buka (Shiruetto)) & Hibi (ヒビ): Two people who are always hanging out with Dengakuman and watching all of Bo-bobo's moves as he and the rebels infiltrate Z-Block; all while proclaiming how cute their leader is. The male, who has no name outside "Silhouette", is completely black. He's later seen driving Dengakuman's tank. The female, Hibi, ends up defeated through a bathroom encounter with Softon and Serviceman. Although the two of them are Dengakuman's friends, they easily turn on him while he's facing Bo-bobo.

Locations
Retrieved from "https://bobobo.fandom.com/wiki/Z-Block?oldid=20714"
Community content is available under CC-BY-SA unless otherwise noted.